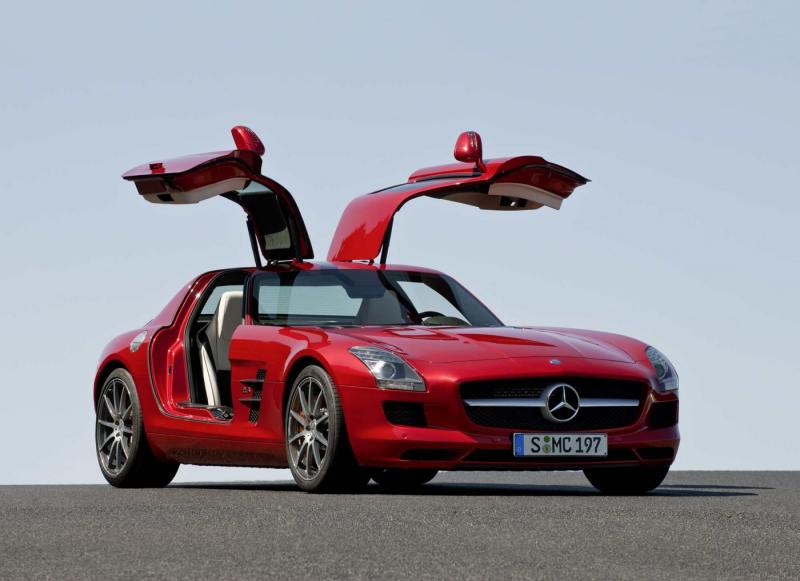 Gull-wing door (German: Flügeltüren) is an automotive industry term describing car doors that are hinged at the roof rather than the side, as pioneered by the 1952 Mercedes-Benz 300SL race car (W194) and its road-legal version (W198) introduced in 1954.

Opening upwards, the doors evoke the image of a seagull's wings. In French they are portes papillon (butterfly doors). The papillon door, slightly different in its architecture from a gullwing door – which Jean Bugatti designed in 1939, fourteen years before Mercedes-Benz produced its similar, famous 300SL gullwing door – is a pre-cursor, but is often overlooked when discussing "Gull-wing" design. Conventional car doors are typically hinged at the front-facing edge of the door and the door swings outward in a horizontal plane.

Apart from the Mercedes-Benz 300SL of the mid-1950s and the experimental Mercedes-Benz C111 of the early 1970s, the best-known examples of road-cars with gull-wing doors are the Bricklin SV-1 from the 1970s and the DeLorean DMC-12 from the 1980s. Gull-wing doors have also been used in aircraft designs, such as the four-seat single-engine Socata TB series built in France.

Despite the common misconception that the gull-wing doors are mere stylistic affectations, the design is a very practical one in a tight urban parking space. When properly designed and counterbalanced, they require little side-clearance to open (about 27.5 cm, or 11" in the DeLorean) and allow much better entrance/egress than conventional doors. The most obvious downside to having gull-wing doors is that, should the car roll over and come to rest on its roof, exit by the doors would be impossible, requiring a large wind screen opening to escape. The DeLorean had a windscreen that was able to be kicked out of place in the event of a roll-over.

A Volvo concept car (Volvo YCC) that was designed by and for women had gull-wing doors to make it easier to lift shopping bags or children into the car. 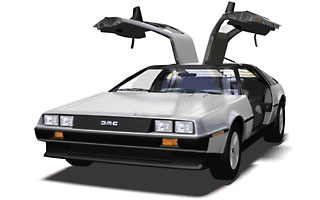 Gull-wing doors have a somewhat questionable reputation because of early examples like the Mercedes and the Bricklin. The 300 SL needed the door design as its tubular frame race car chassis design had a very high door sill, which in combination with a low roof would make a standard door opening very low and small. The Mercedes engineers solved the problem by also opening a part of the roof. The Bricklin was a more conventionally sized door but the actuation system was problematic in day-to-day use and led to unreliable operation until an aftermarket air-door upgrade was installed in all Bricklins. In addition, there was some concern that in making the doors as light as possible they wouldn't provide adequate protection in side-impact accidents. There was, however, no indication that this concern was justified.

The DeLorean solved these problems by using a solid-steel torsion bar (supplied by Grumman Aircraft Engineering Corporation) to counterbalance a full-sized door and then used simple pneumatic struts similar to those found in hatchback cars to open the doors and damp their movement.

Other disadvantages of the system were not so easy to address. For example, the gull-wing design makes creating a convertible version of the car harder, as the hinges would be removed with the roof, and standard doors would be needed for the convertible. Mercedes did so when replacing the gullwing coupe altogether with the 300SL roadster in 1958. It was never a concern for DeLorean since no convertible version was ever planned.

It also makes sealing the car against water leaks more difficult because of the shape and movement path of the door itself. Many DeLorean owners report leakage when taking their vehicles through automated car-washes because of the high-pressure water jets, though in ordinary rainfall the seals are more than adequate.

The following is a (partial) list of production and kit automobiles with gull-wing doors:

Gullwing doors are common in kit cars and many were made that are not included on this list. They were almost always one of the most mechanically problematic parts of these vehicles