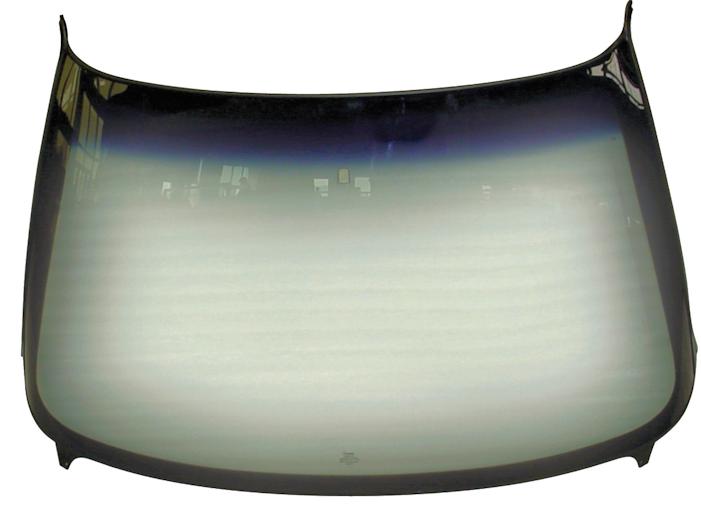 Laminated glass is a type of safety glass that holds together when shattered. In the event of breaking, it is held in place by an interlayer, typically of polyvinyl butyral (PVB), between its two or more layers of glass. The interlayer keeps the layers of glass bonded even when broken, and its high strength prevents the glass from breaking up into large sharp pieces. This produces a characteristic "spider web" cracking pattern when the impact is not enough to completely pierce the glass.

Laminated glass is normally used when there is a possibility of human impact or where the glass could fall if shattered. Skylight glazing and automobile windshields typically use laminated glass. In geographical areas requiring hurricane-resistant construction, laminated glass is often used in exterior storefronts, curtain walls and windows. The PVB interlayer also gives the glass a much higher sound isolation rating, due to the damping effect, and also blocks 99% of incoming UV radiation.

Laminated glass was invented in 1903 by the French chemist Edouard Benedictus, inspired by a laboratory accident. A glass flask had become coated with the plastic cellulose nitrate and when dropped shattered but did not break into pieces. Benedictus fabricated a glass-plastic composite to reduce injuries in car accidents. It was not immediately adopted by automobile manufacturers, but laminated glass was widely used in the eyepieces of gas masks during World War I.

By 1939 some 600,000 square feet (56,000 m2) of "Indestructo" safety glass was being used every year in vehicles produced at the Ford Motor Company works in Dagenham, England."Indestructo" safety glass was manufactured by British Indestructo Glass Ltd of London.This was the laminated glass used by the Ford Motor Company in 1939, chosen because "it gives the most complete protection. In addition to being splinterproof it is crystal clear and permanently non-discolourable.". This quote hints at some of the technical issues, problems and concerns that stopped laminated glass from being widely used in automobiles immediately after it was invented.

Modern laminated glass is produced by bonding two or more layers of ordinary annealed glass together with a plastic interlayer, usually polyvinyl butyral (PVB). The PVB is sandwiched by the glass which is passed through rollers to expel any air pockets and form the initial bond then heated to around 70 °C in a pressurized oil bath. The tint at the top of some car windshields is in the PVB.

A typical laminated makeup would be 3 mm glass / 0.38 mm interlayer / 3 mm glass. This gives a final product that would be referred to as 6.38 laminated glass.

Multiple laminates and thicker glass increases the strength. Bullet-resistant glass is usually constructed using polycarbonate, thermoplastic, and layers of laminated glass. A similar glass is often used in airliners on the front windows, often three sheets of 6 mm toughened glass with thick PVB between them.

Newer developments have increased the thermoplastic family for the lamination of glass. Beside PVB, important thermoplastic glass lamination materials today are EVA (EthylVinylAcetate) and TPU(thermoplastic Polyurethane). The adhesion of PVB/TPU and EVA is not only high to glass but also to Polyester (PET) Interlayer. Since 2004 metallised and electroconductive PET-Interlayers are used as substrate for light emitting diodes and laminated to or between glass. 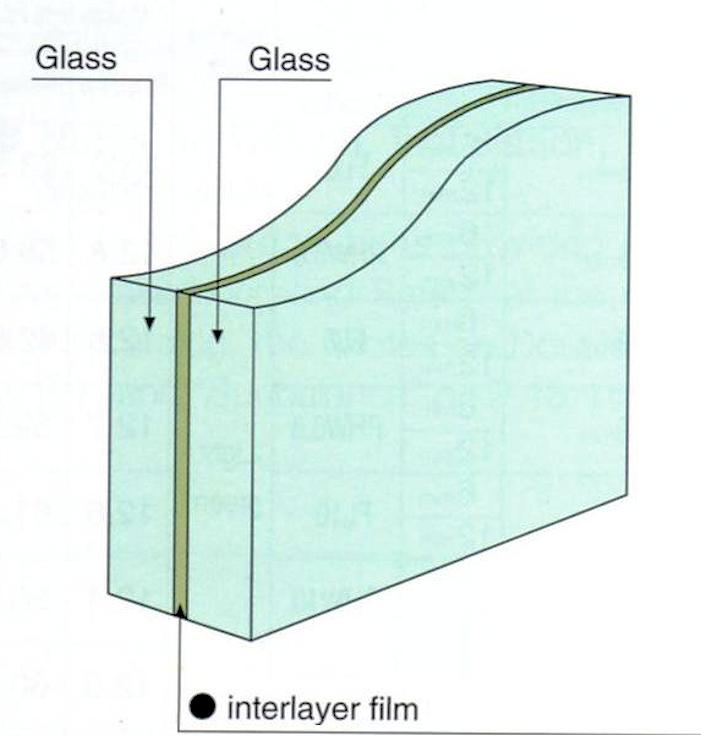