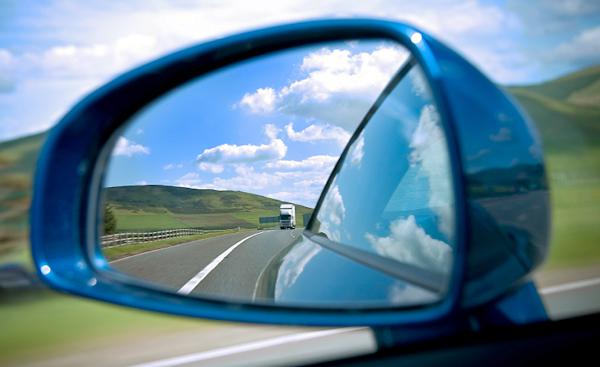 A wing mirror (also fender mirror, door mirror, or side mirror) is a mirror found on the exterior of motor vehicles for the purposes of helping the driver see areas behind and to the sides of the vehicle, outside of the driver's peripheral vision (in the 'blind spot').

Although almost all modern cars mount their side mirrors on the doors, normally at the "A" pillar, rather than the wings (fenders – portion of body above the wheel well), the "wing mirror" term is still frequently used. However, wing mirrors continue to be relatively common in the Japanese domestic market. The mirrors on bicycles and motorcycles are usually mounted to the handlebars, and there are usually two of them.

The side mirror is equipped for manual or remote vertical and horizontal adjustment so as to provide adequate coverage to drivers of differing height and seated position. Remote adjustment may be mechanical by means of bowden cables, or may be electric by means of geared motors. The mirror glass may also be electrically heated and may include electrochromic dimming to reduce glare to the driver from the headlamps of following vehicles. Increasingly, the side mirror incorporates the vehicle's turn signal repeaters. There is evidence to suggest mirror-mounted repeaters may be more effective than repeaters mounted in the previously predominant fender side location.

U.S. the U.S. National Highway Traffic Safety Administration's Federal Motor Vehicle Safety Standard 111 and the analogous Canada Motor Vehicle Safety Standard 111 require the driver side mirror to provide "unit magnification", i.e., an undistorted 1:1 reflection achieved with a flat mirror. However, unit magnification limits the field of view that can be provided by a mirror of size compatible with the vehicle body. The ECE regulations in use throughout most of the world except North America permit the driver side mirror to have a planar, convex, and/or aspheric surface; an aspheric section is often combined with a larger convex section, and the two sections are separated by a visible line to alert the driver to the two sections' different perspective shifts.

Because of the distance from the driver's eye to the passenger side mirror, a useful field of view can only be achieved with a convex or aspheric mirror. However, the convexity also minifies the objects shown. Since minified objects seem farther away than they actually are, a driver might make a maneuver such as a lane change assuming an adjacent vehicle is a safe distance behind, when in fact it is quite a bit closer. In the United States, Canada,India, Korea and Australia, non-planar mirrors are etched or printed with the warning legend objects in mirror are closer than they appear. In Canada, this warning is often supplemented by a transparent decal on the passenger side window repeating the warning in French: les objets dans le retroviseur sont plus proche qu'ils ne le paraissent. In Korea, the warning appears in Korean. Warnings of this nature are not required in Europe, where the plethora of languages would make it difficult to implement a universally-comprehensible warning.

Some side mirrors may be manually or electrically folded in, to protect them when the car is parked. Passing cars can easily clip protruding wing mirrors; the folding capability helps protect them from harm.

U.S. Federal Motor Vehicle Safety Standard 111 requires that convex side view mirrors must have a curvature radius of between 889 mm and 1651 mm.Canada Motor Vehicle Safety Standard 111 stipulates a range of between 890 mm and 1800 mm.Neither the U.S. nor the Canadian standard allows for aspheric mirrors. The European ECE Regulation 46 used throughout most of the world permits planar, convex, and/or aspheric mirrors on either side of the vehicle. American research suggests non-planar driver side mirrors may help reduce crashes.

ECE Regulation 46 also requires that side mirrors be mounted such that they swing away when struck by a test cylinder meant to represent a pedestrian. 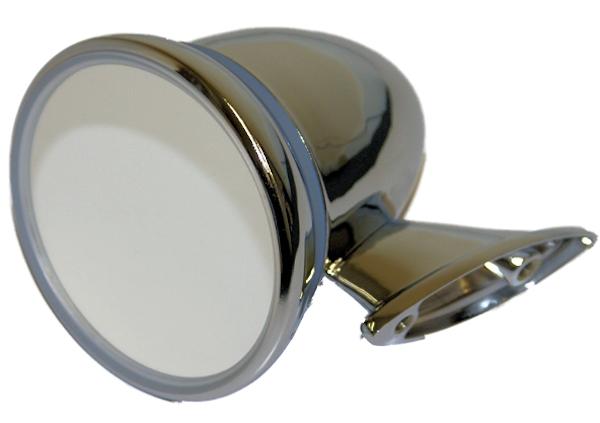