The Innocenti C is a car with a coupé bodywork produced by the Innocenti car manufacturer from 1966 to 1968 .

After the presentation of the new Fiat 850 Coupé and Spider that with their performance had obtained enthusiastic feedback, Innocenti tried a small sports cars and adding a coupe version to the 950 Spider model .The technical superiority of the "850 Coupé", together with the modern line, the possibility of carrying 4 people and at a decidedly lower price, determined Innocenti C's exit from the scene only after two years of production and a few hundred units built.

Presented at the Turin Motor Show in November 1966, the Innocenti C was clearly derived from the Innocenti 950 Spider, but with considerable variations, including structural ones. The Ghia had prepared a modified chassis with increased wheelbase and track width, in order to make the passenger compartment more comfortable for tall people. New the design of the grille and the arrangement of the rear lights, placed horizontally.

The increased engine, always of BMC origin , with its 58 HP (SAE) allowed discrete performance, also thanks to the car's low weight. Beneath the fixed pavilion, well finished interiors, with wraparound seats and complete instrumentation.

The only sore point is was rather expensive compared to the directly competing models of Italian production, such as the aforementioned Fiat 850 Coupé or the various specials derived from the same mechanics , made by Abarth , Vignale and many other bodies, including the Ghia. To emphasize the Italian character of the car, the Innocenti C was delivered in only three colors green, white and red for the body, with black leatherette interiors . The white body could be combined with red interiors. 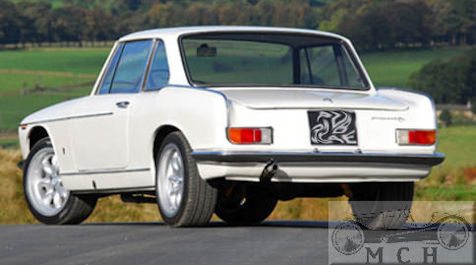