In April 1982, at the same time as the engines were changed for Daihatsu units, the Mini's original rubber suspension was changed to a more conventional (and comfortable) independently developed layout with MacPherson struts up front and an independent, leaf-sprung rear suspension with lower wishbones. To indicate the new engines, the cars were renamed Innocenti Tre Cilindri, or simply "Tre" (three). The new engines and suspension carried with them a weight penalty of about 55 kg (121 lb). The new Innocentis were nearly indistinguishable from their predecessors, the external changes being limited to badging and a chin spoiler. In January 1984, along with a light facelift, they were renamed Minitre (sometimes written "Mini 3"). Most of the new parts came straight from the Daihatsu Charade. European exports, which had hitherto been managed by local British Leyland affiliates, were either halted or generally slowed down. For the first year or two, Minitres were limited to exporting to France, Belgium, and Switzerland. In 1983, the German Daihatsu importer Walter Hagen took over sales there, after a hiatus of over a year. The old Leyland-engined versions continued to be sold until stocks ran out. In spite of the new model, production dropped steadily: from 23,187 in 1981 to 21,646 the next year to 13,688 in 1983, the first year in which all cars were Daihatsu-engine During 1984, sales shot up again as the car had regained its credibility.

Aside from the sporting turbocharged version, the Minitre was originally only available with a carburetted 52 PS (38 kW) petrol engine, in three different levels of trim: S, SL, and SE. While usually fitted with a five-speed manual transmission rather than the four-speed unit used in the earlier four-cylinder cars, a two-speed semiautomatic also became available in July 1984, sold as the "Minimatic". This was the same unit as the one marketed as the "Daimatic" by Daihatsu themselves. The Matic's gearbox has the same dimensions as does the manual transmission, and is fitted with a torque converter and a planetary gear train with two gear ratios which are selected by a traditional, floor-mounted gear lever.

While the Daihatsu powertrains were considerably more expensive than the British units, Alejandro DeTomaso stated that this was more than paid for by lowered warranty claims. In 1984 he said that warranty repairs were down by 70% when Japanese-engined Minis were compared with the BL-engined ones. His biggest problem was that his service network had become overstaffed as a result of the higher quality engines. To be honest, this surfeit of servicing staff may have also been a result of steadily declining production numbers (down from the forty-thousands in the late seventies to the mid-teens by 1984/1985), something which De Tomaso tried to ameliorate by offering a more luxurious and customizable product than did their main competitor Fiat.

The three-cylinder (and some two-cylinder versions as well) continued in production until 1993, and this range was also available with a 37 PS (27 kW) diesel version of the 1-litre engine. The diesel looked the same, inside and out, as did the regular Minitre. At the time of introduction (April 1984), this engine was not only the smalllest passenger car diesel in the world, but also had the highest specific output of any naturally aspirated diesel engine in series production - it thus made for a surprisingly spirited performer. Introduced as part of an effort to bring Innocenti production above the threshold of profitability, around 20,000 cars annually, the Minidiesel sold very well right out of the box. The diesel took thirty percent of the overall production with nearly no negative effect on sales of the petrol versions, a considerably bigger share than the expected twenty percent.

In Turin 1986, the longer 990 was presented – this version had a wheelbase which was extended by 16 cm (6 in) and was available with either the naturally aspirated petrol or diesel 1 L engines. In addition to a more useful backseat, the 990 also had a more sloped windshield for somewhat better aerodynamics. A well balanced design, the longer wheelbase version can be hard to identify, if it wasn't for the missing pillar in the glass of the door, and the forward placement of the rear view mirrors. The luggage space also increased somewhat, with 295 L (10.4 cu ft) rather than 280 L (9.9 cu ft). The 990 was an adaptation of a 1982 concept executed by the Embo carrozzeria, using the longer chassis of the Mini Traveller.Excepting the turbo, the shorter 1-litre versions were taken out of production in July 1987. The 990 was available as the SL, and as a better-equipped SE version.

A "Minidue" had been rumored for some time, but most were expecting the fitment of a Moto Guzzi 650 cc V-twin engine, since Moto Guzzi was another company owned by de Tomaso at the time A few prototypes were even built with this engine, but the amount of work it would have taken to make the motorcycle unit suitable for a car made the project unfeasible.Instead, Innocenti chose to stick to Daihatsu engines. First shown at the Turin Auto Show in November 1984, the two-cylinder, short-stroke 617 cc "Mini 650" was also available as a better equipped "SE" model. The 650 received a silver-painted asymmetric grille, while the SE model had model-specific hubcaps divided into threes. While not very powerful at 31 PS (23 kW), the two-cylinder engine was surprisingly smooth-running thanks to the use of twin balance shafts. The dashboard was also unique to the 650 and was quite spartan, for instance it had no door to the glove compartment. In the rear, the reflective bar between the taillights was replaced by a black plastic unit.

The "650" was succeeded by the three-cylinder 550 cc (660 cc from late 1990) "Mini 500". These engines all came from the Daihatsu Cuore rather than the bigger Charade. The 550 cc Innocenti 500 (with L or more luxurious LS equipment) was first shown in November 1987 and replaced the preceding "650" since engine-supplier Daihatsu had ended production of the outdated two-cylinder engine. The carburetted 500 offered 31 PS (23 kW) at 6,400 rpm for a 116 km/h (72 mph) top speed. Outside of Italy, this car also found some popularity in France, where its 3CV tax rating was as low as the considerably less habitable Fiat 126.

Following Fiat's 1990 takeover of Innocenti, the car was renamed the Innocenti Small and the Diesel, Matic, and Turbo de Tomaso versions were dropped. Updates included a slight facelift in November 1990, while the little 500's engine was updated to a 659 cc version following changes to the kei car regulations in March 1990 to allow for 660 cc of displacement—Daihatsu had quickly replaced the smaller EB engine with the somewhat bigger EF unit. Power remained exactly the same, while an increase in torque from 42 N·m (31 lb·ft) at 4,000 rpm to 49 N·m (36 lb·ft) at 3,400 rpm increased flexibility and meant that the top speed crept up to 120 km/h (75 mph). Fuel economy also increased moderately. In July 1991 a luxurious "Serie Speciale" variant of the 990 was introduced, also offered with an available canvas-roof.The 990 Serie Speciale featured an alcantara interior by Missoni.

In 1992, fuel injected and catalyzed versions of both Innocenti Small versions entered the market. These versions had marginally lower power (see table) and top speeds. The last development was the "Small 500 SE" of 1993, which offered the smaller engine mounted in the longer "990"-style body. Production ended on March 31, 1993, with sales continuing into the next year. Daihatsu did stop using the three-cylinder CB engine in their own cars a few months before, but this may be coincidental.

After the change to Daihatsu engines, a new De Tomaso version with a turbocharged, 72 PS (53 kW) version of the 993 cc three-cylinder engine was presented in December 1983. Italian sales began the next month. This was the two-valve version; the considerably more powerful multivalve version used in the Charade GTti was never used in the Innocenti. The bodywork was also revised, with the headlights now sloping backwards and with new bumpers, skirts, and fender extensions to fit the 160/65 SR315 (TRX) alloys. The sporty steering wheel received a leather rim. The original version was equipped with an Italian development of the naturally aspirated CB22 engine (called CB-DT), with an IHI RHB5 turbocharger and the same 9.1:1 compression ratio as for the CB22. Max power was reached at 6,200 rpm for the original version. In the second half of 1984 this engine was replaced with the fully Daihatsu-built CB60 engine. The CB60, with a smaller IHI RHB32 charger and a more suitable 8:1 compression ratio (with a 0.5 bar charge, rather than the 0.37 bar used in the CB-DT), reached max power at 5,700 rpm. Tractability at lower engine speeds also improved since the smaller charger was more willing to spool up; this had been an area of concern with the earlier engine which did not have a whole lot of power beneath 3,500 rpm.

In July 1988 the engine was upgraded to CB61 specifications; this version received grey rather than red casings in the engine compartment. For the Canadian (and Swiss) markets, a catalyzed version of the carburetted CB60 engine was installed. This unit was slightly less powerful, with 68 PS (50 kW) at 5,500 rpm. After Fiat's purchase of Innocenti in 1990, the Turbo de Tomaso, along with the diesel and the "Matic" versions, were all dropped.

The Innocenti DeTomaso was brought to Canada by Incacars Inc from 1984 but sales dropped considerably with concerns about reliability – from 2,000 cars the first year to only 196 in the first six months of 1986. Aside from a catalyzed version of the CB60 engine, the Canada-bound DeTomasos also received unique rectangular side-marker lights. 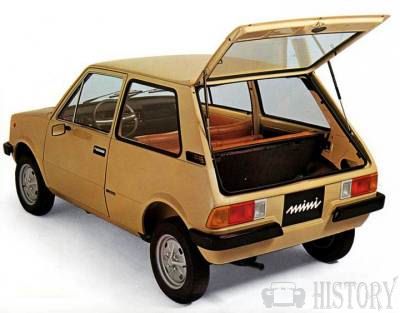