Innocenti, under the ownership of the British Leyland Motor Corporation (BLMC) developed rebodied versions of the Mini, known as the Innocenti Mini 90L and 120L, which were released at the Turin Show in 1974. The new, Bertone-styled Mini was originally launched in two versions, the 90L and 120L – the former having the 998 cc A-series engine putting out 43 bhp (32 kW; 44 PS), and the latter the 1,275 cc unit, with an extra 20 bhp (15 kW) on tap. These outputs were later uprated to 49 bhp (37 kW; 50 PS) and 65 bhp (48 kW; 66 PS) respectively. As for the English-built Mini, the Innocenti received the "dry" rubber cone suspension, which provided excellent handling but at the cost of a very bumpy ride. All Leyland-engined Innocentis received a four-speed manual transmission.

At one point there were even plans for the Bertone-designed Mini to replace the original British Mini, but these came to nothing. Within a year of the car's launch, BLMC went bankrupt and in May 1976 Innocenti was sold to De Tomaso and GEPI. BL retained a 5% stake. The new owners renamed the company Nuova Innocenti ("New Innocenti") and continued to build the car without any real change.

Innocenti's Mini version was generally nicely equipped and had a better finish than their British brethren, leading to higher sales and a better reputation in many continental European markets (aside from Italy), such as France.

At the 1976 Turin Auto Show the sporting Innocenti Mini de Tomaso was first shown. It entered series production in early 1977 and featured moulded plastic bumpers rather than the filigrane, chromed units used for the 90/120. There were also integral foglights, a hood scoop, and wheelarch extensions to accommodate the alloy wheels which completed the sporting appearance. Power at introduction was 71 bhp (53 kW; 72 PS), but this crept up to 74 bhp (55 kW; 75 PS) in 1978.

In 1980, the facelifted and better equipped Mini Mille made its appearance. The Mille (1000) replaced the larger-engined 120 in most markets, and featured molded plastic bumpers, headlights which sloped backwards, and redesigned taillights. Overall length increased by a couple of inches (5 cm). There was also a "90 LS II" version introduced for 1981, and the "90 SL" for the 1982 model year By 1982, however, Alessandro de Tomaso's deal with BL had ended. For various reasons, politico-industrial as well as due to British Leyland's reluctance to provide engines to what was a competitor in many continental markets, the decision to thoroughly reengineer the Innocenti Mini was reached. After a lot of testing, the car was finally adapted to take a three-cylinder Daihatsu engine and various other mechanical parts. Because of Daihatsu's minuscule European presence, selling engines to Innocenti would have a minimal negative impact on their own sales, instead offering a door to many European markets that they had yet to reach. Thanks to Alfa Romeo's Arna deal with Nissan a few years earlier, the Italian political resistance against Japanese companies was minimized and DeTomaso encountered no political difficulties. 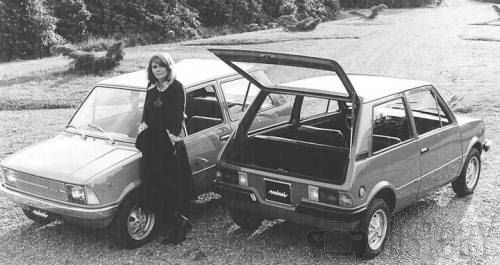