Industrias Kaiser Argentina S.A. or IKA was an Argentine motor car company established in 1956 in Córdoba Province as a joint venture with Kaiser Motors of the United States.

The automaker produced a variety of Kaiser Jeep vehicles and American Motors (AMC) models, including Argentina's most iconic car, the Torino, before partnering with France's Renault, which bought it out in 1970.

The government of Argentina sent a delegation to the United States in 1951 to meet with auto manufacturers interested in building cars in Argentina. Unfortunately the market was seen as too small to justify the investment, and no one but Kaiser was interested. On 19 January 1955, the government signed an agreement to permit Kaiser to manufacture automobiles and trucks in Argentina. The U.S. automaker was facing problems in its domestic market. It took the Willys Aero out of production in 1955 leaving two redundant sets of vehicle production lines. The Kaiser auto manufacturing equipment was shipped to Argentina while the Willys equipment formed the automaker's capital contribution to establish a new company in Brazil.

The first imports from the U.S. consisted of 1,021 complete cars, manufacturing equipment, and spare parts. Groundbreaking for the new factory in the city of Santa Isabel in Córdoba Province was held in March 1955 with the first Jeep vehicle driven out on 27 April 1956.

The initial production was of various Jeeps. Models included the CJ versions, as well as the Willys Jeep Truck or IKA Baqueano Pick-up, and the Willys Jeep Wagon or IKA Estanciera as well as a panel delivery version known as the IKA Utilitario. These utility vehicles were shortly followed by a local version of the Kaiser Manhattan 4-door sedan, called the Carabela, using the U.S. production equipment which had been transferred to IKA. The combined Carabela-Jeep production of 22,612 units was 81% of all vehicles manufactured in Argentina in 1958 with the only competition being a state-run utility vehicle manufacturer.

To expand the marketing of its vehicles in 1958, IKA sponsored a musical variety show El Show de IKA that highlighted an American vocalist, Andy Russell. It was the most expensive TV program produced in Argentina, a Jeep was driven on the stage during every show, and the first to use cameras mounted high above the stage.

In 1959, the American-Argentine company become IKA Renault as a result of an agreement to produce the French firm's Renault cars. The small Renault Dauphine was produced and badged IKA Dauphine. 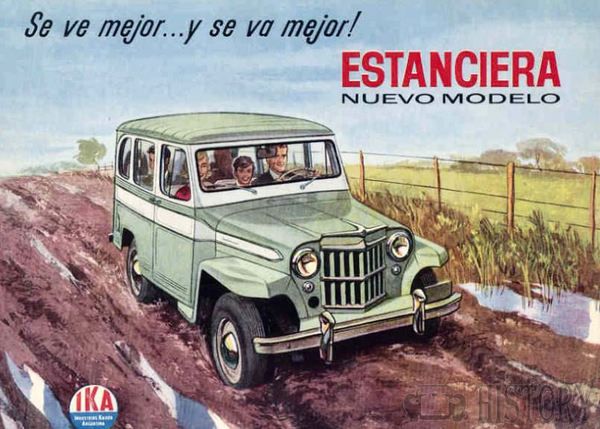 The Carabela model was discontinued in 1962, and by that time IKA also assembled other automobiles. Alfa Romeo sold IKA the body molds for its discontinued Alfa Romeo 1900 sedan to become the IKA Bergantin.

Production started on 10 March 1960. The Bergantin was described as the first locally conceived, designed, and engineered car. Local content made in Córdoba included a Willys 2480 cc four-cylinder engine and the Jeep rear suspension and drum brakes that were also used in the Estanciera. The car rode on a 103.3 in (2,624 mm) wheelbase with an overall length of 173 in (4,394 mm). Starting on 31 May 1961, the IKA Bergantin received the 115 hp (86 kW) Continental six-cylinder that was already used for the Estanciera and Carabela models, but only 353 units were made with this engine. Production of the IKA Bergantin ended on 21 February 1962, with nearly 5,000 units sold in three versions: Standard, Deluxe, and Taxi cab. At the time, IKA's Cordoba plant produced about 40,000 vehicles annually, including Renaults and Jeeps as well as Kaisers and Ramblers.

In 1962, another joint model venture agreement took place between IKA and American Motors Corporation (AMC). Various Rambler models licensed from American Motors Corporation (AMC) replaced all of the old Kaiser and Alfa Romeo based cars. In order to meet local content regulations, however, the Ramblers were adapted to use an Argentine-built Kaiser engine - which luckily was an easy fit, perhaps since the same engineer (Ralph H. Isebrandt) had designed both drivetrains. The final form of the AMC variants was the potent Rambler American/Classic-based Torino that saw a success on international racing circuits. Production peaked in 1965, with a total of 55,269 vehicles were assembled by IKA of which about one-third were Kaiser-Frazer based cars and Jeeps, while other two-thirds were Nash Ramblers and (from 1960) Renaults produced under license.Representing about 28% of Argentina's total production, IKA was the nation's largest independent automobile manufacturer with 8,500 employees.

By 1966 the Santa Isabel plant was producing a broad line of models that included the following:

In 1967, Régie Nationale des Usines Renault of France assumed control of the company by purchasing a large percentage of the shares of stock and changed its name to IKA Renault S.A.

In 1970 Kaiser Industries decided to exit the auto business and it sold the rest of its IKA holdings to its partner, Renault of France, thus ending the history of Argentina's indigenous automaker. The new enterprise focused on mass consumption models such as the Renault 12.

In 1975, the original factory in Santa Isabel changed from IKA to Renault Argentina S.A. 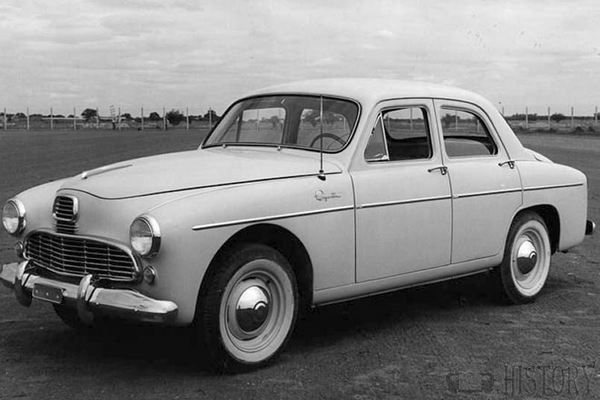