The IFA L 60, and development intensified from 1974. In 1978 the DDR made an agreement with Volvo Trucks to use a Volvo cab on an L 60 prototype. Within two years this resulted in a contract to make Volvo cabs under licence, for which a new production hall would be built at Ludwigsfelde. The contract would include IWL supplying cab shells to the Volvo truck plant at Ghent in Belgium and also allowed IWL to supply cabs to VEB Robur-Werke Zittau in Saxony, which made smaller trucks ranging from about 1.5 to 3.5 tonnes.

When the preparatory work for the new assembly hall at Ludwigsfelde was well advanced, Volvo tripled the price. In 1980 the Ministerrat der DDR cancelled the agreement and ordered that series production of the L 60 was to go ahead without the Volvo cab. IWL accordingly started development of a new cab, the 6400, both for the W 60 and to supply to Robur.

In 1984 IWL again reached agreement to give the L 60 a foreign cab, this time from Steyr in Austria. However, three years later the DDR could not meet Steyr's asking price for the design and the necessary production tools. Instead the L 60 was given a cab based on that of the W 50, but able to be tilted forward for access to the engine.

After the W 51 and W 52 projects were discontinued in June 1983 (see above), the L 60 programme was adapted to the needs of Iran and Iraq. The payload was increased to at least six tonnes and power output was increased to a range from 125 to 180 bhp.

The L 60 was finally unveiled to the public at the Autumn Leipzig Trade Fair in September 1986 and its series production began at Ludwigsfelde in June 1987. L 60 development had started by 1967 so the model arguably reached the market about 15 years late, and its cab derived from that of the W 50 made it look even more out of date. L 60 sales did grow each year, and in 1989 they peaked at 8,081 vehicles for that year. Total L 60 production at Ludwigsfelde from 1987 to 1990 was 20,293 vehicles.

Potential customers within the DDR were deterred not by its appearance but by its price, which was almost double that of the W 50. As a result, IWL kept the W 50 in production alongside the L 60 until 1990.

The DDR's Peaceful Revolution took place in September and October 1989. This was followed by contact between IWL and Mercedes-Benz in February 1990 that launched a joint project designated IFA 1318. A prototype IFA 1318 truck, with a Mercedes-Benz LN2 cab on an L 60 chassis, was completed on 3 May 1990. The IFA-Kombinat Nutzkraftwagen ("IFA Goods Vehicle Combine") was broken up and in June 1990 a separate IFA-Automobilwerk Ludwigsfelde GmbH was founded under the Treuhandanstalt.

However, the DDR's adoption of the West German Deutsche Mark on 1 July 1990 led Mercedes-Benz to withdraw from the intended deal by 18 July. As a result, IWL projected that it would reduce its workforce from 8,334 at the end of June 1990 to about 3,150 by the end of the year. The Treuhand would help with the cost of redundancy payments and 2,514 employees would be converted to other work and would be kept on short time until mid-1991.

Even this plan was overtaken by the collapse of its established markets in eastern Europe. Orders and production plummeted and in 1990 a combined total of only 17,275 trucks were completed — the lowest number since 1969. L 60 production was terminated in August 1990, and W 50 production was ended 17 December that year. 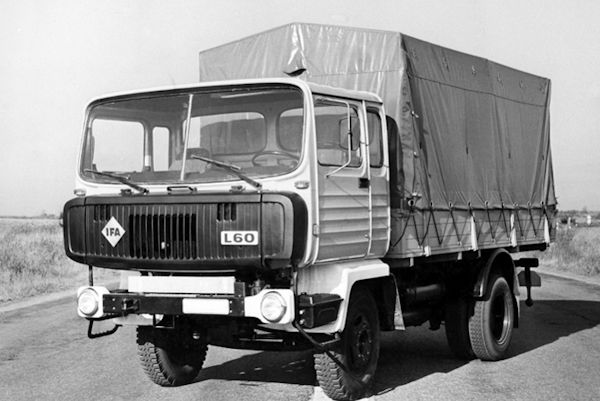