The Hudson Greater Eight was a premium line of automobiles produced by the Hudson Motor Car Company of Detroit, Michigan during 1931 and 1932.

The Hudson Motor Car Company, headed by Roy D. Chapin, developed a reputation and success in the automobile marketplace by building solid cars with good performance for the money and fine reliability. The introduction of the Essex Six in 1924, targeting budget minded buyers, increased the combined sales of Hudson Motors from seventh to third place in the U.S. automobile market by 1925. Production of Hudson and Essex cars continued to hold third place for 1927, fourth place in 1928, and returned to capture third in 1929 with a total of 300,962 units.

The automaker decided to move upmarket and in 1930, launched a line of cars called Great Eight. Hudson Eights were "often luxurious, and usually smooth, effortless performers" powered by a new for 1930 straight-eight engine that would be produced through 1952. Total production in 1930 for Hudson Motors fell by almost 40% to 113,898 units.

For 1931, the automaker renamed the line to "Hudson Greater Eight" – implying that the new models "were even better than" the previous year because of additional engineering and styling advances. Production declined even further dropping Hudson from the top 8 brands in the U.S.

Hudson hired its first professional designer in early 1931, Frank S. Spring, with the title of "engineering stylist". His work was first incorporated on the 1932 model year Hudsons, but he became best known for his contributions to the 1948-1954 "Step-Down" design(third-generation Hudson Commodores and first-generation Hudson Hornets) and remained with the company until its merger with Nash, forming American Motors Corporation (AMC) in 1954.

The Greater Eight received Hudson's first attempts at having a softer, less rigid styling. The Greater Eight offered a number of stylish features including a fine mesh grille-work that set it apart from other contemporary marques. It came with full instrumentation.

Hudson made only a few boat-tailed roadster models. The bodies were built by Murray and even though the style never made the sales literature, a 1931 Hudson Greater Eight boat-tailed roadster was built making it the one and only time this style appeared on a Hudson chassis.

Even with their larger engines and lower prices than the 1930 models, sales during the Great Depression in the United States were down from the previous year. Sales of the Greater Eight totaled 22,250 for 1931.

For 1932, the Greater Eights received new, more streamlined styling, including a greater slope of the windshield. Hudson's engineering stylist, Frank S. Spring, made the fenders more graceful and gave the car's body gentler curves. The 1932 models featured a prominent Vee'd grille with vertical chrome theme. The cars were recognizable by their uniquely styled rounded-triangle shaped headlights and parking lights, which mimicked the shape of Hudson's triangle logo. The triangle theme was also repeated in the interior, including the driver's floor pedals.

The new design also received mechanical upgrades including 30% larger brakes than those on the previous models. The I8 engine was also increased to 254 cu in (4.2 L) and produced 101 brake horsepower (75 kW). Options included a freewheeling clutch to disengage the driveline, as well as a selective-control automatic clutch.

Economic conditions were not improving and sales for 1932 totaled less than 8,000 Greater Eights, despite prices remaining the same and the addition of two "lush" new series to the product offer: the Sterling (Series U on a 126-inch (3,200 mm) chassis and the Major (Series L with a 132-inch (3,353 mm) wheelbase).Total production for both Hudson and Essex moved up to 57,550 during the lowest point for the U.S. automotive industry during the Great Depression.

For 1933, the Hudson Eights were four "standard" models riding on a 119-inch wheelbase and five luxurious Major series models built on a 132-inch (3,353 mm) platform. The line was renamed the Hudson Pacemaker Standard Eight.

By this time, the company was struggling because of low sales and mounting financial losses. In May 1933, Roy D. Chapin returned to Hudson after serving as the United States Secretary of Commerce during the last months of President Herbert Hoover's administration and spent his final three years of life trying to save the automaker from the effects of the Great Depression. Hudson had fared poorly during the Great Depression (1929–36) compared with other domestic automakers with its rank falling back from third to eight in terms of production.

During the 1930s, automobile production by the Big Three (General Motors, Ford, and Chrysler) increased, while all the other domestic automakers were damaged and saw their total market share drop from 25% in 1929 to 10% by 1939. with many of the premium-type brands disappearing, such as Cord, Durant, Franklin, Peerless, Pierce-Arrow, and Stutz. 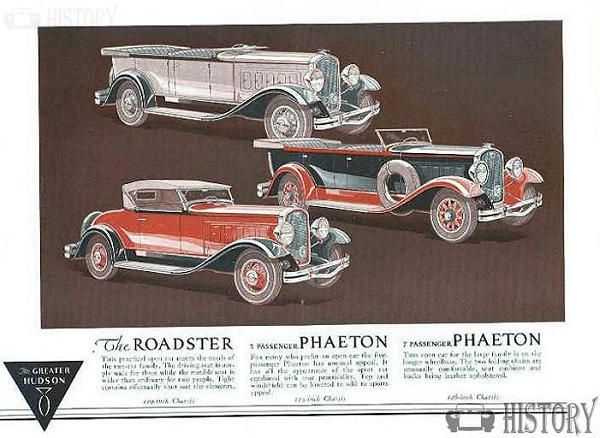