The Horch 10 was brought out as the first new model after the First World War . The construction was taken over by Arnold Zoller at the Argus Motoren Gesellschaft in Berlin. Their owner Moritz Straus held from the early 1920s, the majority of shares of Horchwerke AG.

The vehicle had a front-mounted 4-cylinder inline engine with upright valves and 1.6-liter displacement. He developed 35 hp at 2000 rpm. He propelled the rear wheels via a 4-speed gearbox with gear lever in the middle of the car. The cars with U-profile frame had leaf spring axles and were available as a four-seat touring car or city coupe.

In July 1923, Paul Daimler became chief designer at Argus and revised the engine. He designed a valve train with overhead camshaft, which was driven by a vertical shaft. These changes gave the engine 50 hp at 2800 rpm. The car was offered in 1924 Horch 10, was the first German car four-wheel brakes delivered and  By 1926, about 2300 pieces were made.

From 1926 replaced the Horch 8 from this model series. 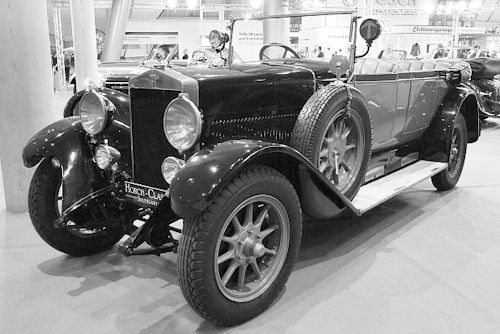