For the third generation (introduced in September 1983 for model year 1984), the Civic's wheelbase was increased by 2–5 inches (13 cm) to 93.7 inches (hatchback) or 96.5 inches (sedan). A three-door hatchback, four-door sedan (also known as the Honda Ballade), the five-door "Shuttle" station wagon, and sporting CRX coupé shared common underpinnings. This included independent front control arms with torsion bar springs and a semi-independent rear beam with coil springs. However, the body panels were largely different between models. The Civic-based Honda Quint five-door hatchback also underwent a model change, and became the Honda Quint Integra, available as both a three- and five-door fastback. The Quint Integra (soon just "Integra") was sold at the Japanese Honda Verno dealership along with the CR-X. The Civic in Japan was now exclusive to Honda Primo, along with Honda's kei cars as well as superminis like the Honda City.

The sedan and hatchback shared the same dashboard, but the CRX and wagons both had their own unique dash (CRX having a covered cubby in the middle of the dash, the wagon having a pop up set of vents which could be used or retracted into the dash). The hatchback adopted a flatter roof over the rear seats, drawing influences from a bodystyle known in Europe as a shooting-brake, that seemed to blur the definition between traditionally defined hatchbacks and the shooting-brake. The flat roof, three door hatchback appearance was also used on the supermini Honda City, and the Honda Today, the car that returned Honda to kei car production. This appearance was also used on the Honda Accord Aerodeck. The Honda CR-X was the only three-door hatchback that adopted a fastback, sloping rear hatch, demonstrating a performance car appearance identified with Honda Verno products during the mid-1980s. In Europe, the sedan model was also marketed as the Rover 213/216, while in Japan it was marketed in parallel (through "Verno" dealers) as the Honda Ballade. Both the Sedan and Hatchback models were also sold in Indonesia under the name Civic "Wonder". 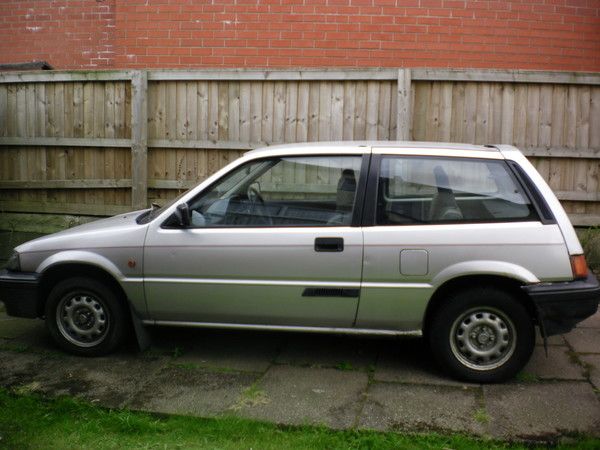 European cars received a 1,200 cc engine at the bottom of the ladder, with 62 PS (46 kW). This was only available in the hatchback, while the sedan range began with a 1300 with 71 PS (52 kW). The Shuttle was only available with the 85 PS (63 kW) "1500", while the CR-X received a fuel injected version of this engine, producing 100 PS (74 kW). All of these engines have three vales per cylinder. The three-box sedan was not intended for sale in the European common market, initially only being available in EFTA markets such as Sweden and Switzerland.

Honda first adopted the Si badge for the Japanese domestic market (JDM) third-generation Civic in November 1984. Mainly offered in hatchback form, the main aesthetic difference for the Si was a slight bulge in the hood, which accommodated the taller DOHC engine. A four-door sedan variant also existed in Japan, but was only produced in small numbers and is rare. Designated as ZC1 in Japan and D16A1 in Europe, the new engine put out 122 hp (91 kW), enabling the car to hit 122 mph (196 km/h) and go from 0–60 mph in 8.9 seconds. Since compact cars at the time typically made less than 100 hp (75 kW), the Si proved popular amongst enthusiasts.

In the United States, a Civic "S" trim was introduced in 1984, featuring sports seats and reclining rear seats. Although the S retained the semi-independent rear beam with coil springs for the suspension, a rear stabilizer bar was added to improve handling. Unlike the JDM Civic Si, the S trim used the same carbureted 1.5 L EW1 engine as the base and the DX trims. 1985 finally saw the US release of the Si trim with the Civic CRX Si, which featured a fuel-injected, 1.5 L SOHC EW3 engine making 91 horsepower (68 kW).

In 1986, the Si trim was extended to the Civic hatchback, offering the same performance of the CRX Si but with four-seats. Added improvements for the Civic Si hatchback included a removable glass sunroof, a five-speed manual gearbox, tilt steering wheel, a full-width taillight panel, a color-keyed front airdam and a roof spoiler. Like the CRX Si, the Si hatchback was powered by the same 91 hp (68 kW), 12-valve SOHC engine designated EW4/D15A3 (the latter code was used for the 1987 model year but with the same specs). The Civic Si also saw a release in New Zealand and Australia in 1987, and sharing similar specs to the American-market Si.Also in 1987 an Si version of the Civic hatchback was introduced, featuring a pop-up glass sunroof, body colored bumpers, and sedan-style disk wheel covers. This model came with the 1.5 L 12 valve fuel-injected engine from the CRX Si, generating 91 hp (68 kW), and a manual five-speed gearbox.

The CRX was a Civic with a slightly different body; it was strictly a 2-seater in the US with a lockable storage compartment, while it was offered to the rest of the world with a rear seat. The CRX lineup added the Si model in 1985 which used Honda's PGM-FI fuel injection on the 1,488 cc four-cylinder; in the United States this generated 91 hp (68 kW) while other markets received a considerably more powerful DOHC, 1.6-litre unit. The Si model added an intricately designed rear wiper, sports seats, and a power sunroof. The CRX Si was also identifiable by body-colored bumpers in 1986, new four-spoke alloy wheels and a body-colored rubber spoiler, now mounted on the back of the hatch as opposed to on the top portion of the lid. A two-tone paint scheme was standard in 1985 in black or red over gray-silver. The two tone paint job (which featured plastic polymer panels) was standard on HF and DX models from 1984 until it's redesign in 1988. The 13-inch alloy wheels were fitted with 175/70R13 Michelin MXL tires. The comparatively quicker inline-four engine propelled the CRX Si from 0–60 mph in under 9 seconds. 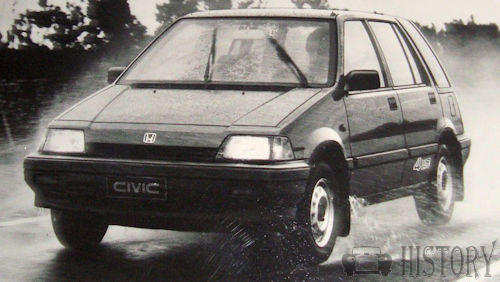 The five-door wagon received unique bodywork and interior. "Shuttle" in most countries, it was called the wagon and "Wagovan" in the United States; the differences being the wagon having 50/50 split folding cloth fixed rear seats that reclined to 4 different positions, and the Wagovan having a vinyl single piece rear seat that slid forward to accommodate additional cargo as well as metal bars across the rear side windows. It was also available as a Van-version, called "Pro", for commercial users in the Japanese domestic market. Its appearance as a "tall wagon" was shared with the concept car Lancia Megagamma introduced earlier. The wagon was originally only available in front-wheel drive; in 1985 and later a part-time any-speed four-wheel drive, operated by a push button on the dash, became available. The four-wheel drive transmission also introduced a low-speed "granny gear" which could only be engaged in four-wheel drive. 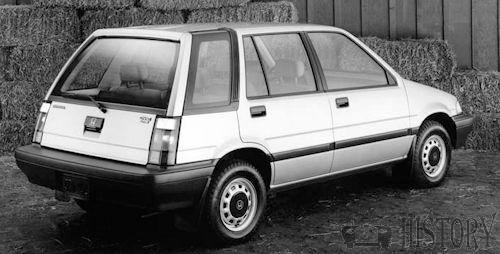