The Hillman Imp was a compact, rear-engined saloon car, manufactured under the Hillman marque by the Rootes Group (later Chrysler Europe) from 1963 to 1976. The Imp was assembled at a new, purpose-built plant at Linwood near Paisley in the West of Scotland conurbation.

A small van, the Commer Imp, was introduced in November 1965 and an estate version, using most of the same panels but with side windows behind the b-pillar, known as the Hillman Husky was produced from 1967.

Known internally at Rootes as the "Apex" project, the Imp was to be the first post-Second World War small car by the group. Its main rival on the home market was the BMC Mini, which preceded the Imp by nearly four years.

One key difference between the two cars was the Imp's 875 cc all-aluminium power unit, adapted by Rootes from a Coventry Climax FWMA fire pump engine which had enjoyed some success on the racing scene. However, the engine used for the Imp differed considerably from the original Climax engine, for instance having an entirely different cylinder head.

The Imp's engine was mounted behind the rear wheels, slanted over at 45° to fit. This was done to keep the center of gravity low and to minimise its effects on the roadholding of the car.

Rear-engined cars generally suffer from oversteer handling characteristics to some extent, and to counteract this as much as possible, the Imp had a semi-trailing arm independent rear suspension system. This relatively costly and sophisticated solution, atypical for small car design at the time, was insisted upon by its designers after testing at length a Chevrolet Corvair with swing axles. To attain balanced handling, the Imp actually used swing axle geometry at the front, but this initially led to too much understeer and the camber was later reduced by lowering the pivot points. Rootes relied upon a team led by two young designers, Tim Fry and Mike Parkes who were given an almost free hand to come up with a small car that would fit well into the Rootes car programme. This at the time centered on derivatives of the Hillman Minx car.

Over the life of the car, Rootes (and later Chrysler UK) produced three basic body styles. The original Saloon was introduced in May 1963 and ran through to the end of production in 1976. It had an opening rear window, making it effectively a hatchback. The opening rear window was intended to make it easier to load the small luggage area behind the fold-down rear seat. The fold-down nature of the rear seat was itself unusual in small car design at the time, being more often associated with larger upmarket estate cars. In 1965 a van badged as the Commer Imp was introduced. A coupe, the Imp Californian, was introduced in 1967 at the same time as the van's pressings were used to create an estate car, badged Hillman Husky. Several estate car prototypes using the saloon body with extended rooflines were tried, but never offered to the public. Instead, buyers choosing the estate had to settle on a van-derived car with somewhat uneasy styling. Both the van and estate ceased production in 1970.

In an attempt to interest a wider public when sales figures fell well short of the intended 100,000 or more cars per annum, several badge-engineered derivatives, such as the luxury Singer Chamois (launched October 1964), and the Sunbeam Sport (launched October 1966), with a more powerful twin-carburettor engine, were offered with varying degrees of success. For marketing reasons the Singer variants were sold as Sunbeams in many export markets, even before May 1970 when the Singer marque was discontinued altogether by Chrysler UK.

The coupe bodyshell was similar to the standard body but featured a more shallow-raked windscreen and rear window which, unlike that on the standard bodied cars, could not be opened. The attempt at a more sporty design did not translate into better acceleration or top speed figures and the aerodynamics of the standard saloon were actually slightly better. The new body style made its first appearance at the Paris Motor Show in October 1967, with the introduction of the sporting Sunbeam Stiletto. The coupe body had also appeared, with less powerful engines, in the Hillman Imp Californian announced in January 1967 and the more luxurious Singer Chamois coupe.

The Imp was a massive and expensive leap of faith for Rootes. The company did not have recent experience building small cars, even though it started off as a car builder by offering the then small Hillman Minx back in 1931. However, the Minx had since grown larger, and by the time the Imp was introduced it was well established as a medium-size family car. For the Imp, Rootes pioneered the use of an aluminium engine in a mass production car. This process proved to be more complicated than simply substituting a familiar and well-understood cast iron design with a new aluminium one. Rootes had to build a new, computerised assembly plant on the outskirts of Glasgow, in the town of Linwood, in which to assemble the Imp, since planning regulations had prevented it from expanding its Ryton plant near Coventry. UK Government Regional Assistance policy provided financial grants to the Rootes Group to bring approximately 6,000 jobs to the area. Linwood had become an area of significant unemployment because of redundnacies in the declining shipbuilding industry on the nearby river Clyde. The investment also included an advanced die-casting plant to manufacture the aluminium engine casings, and a stake in a brand new Pressed Steel Company motor pressings works, which manufactured all the new car's body panels. The location of the plant led to significant logistical issues for the manufacturing process. Linwood was over 300 miles (480 km) away from Ryton, but the engine castings made in Linwood had to be sent to Ryton to be machined and assembled, then sent back up to be put on the cars – a 600-mile (970 km) round trip. This was addressed by a complex schedule of trains shifting completed cars and raw castings south, and trains loaded with engine – gearbox assemblies and many other Ryton sourced goods running north. This schedule remained in operation for the duration of Linwood Imp production.

The local West of Scotland workforce, mainly recruited from the shipbuilding industry, did not bring the distinct skills necessary for motor vehicle assembly, and Imp build quality and reliability suffered accordingly (many years later Alfa Romeo suffered similar problems when they established Alfasud in Naples as a production satellite of Alfa Nord in Milan). However industrial relations was also an issue in production. Industrial disputes and strike action became a regular occurrence, as was the case in many parts of British industry in the 1960s and 1970s. In 1964 there were 31 stoppages and only one-third of the plant's capacity was realised – 50,000 rather than 150,000. The Imp was nonetheless regarded as a "Scottish car" and was more popular in Scotland than elsewhere in the UK.

Initially, the Imp was seen by Rootes as a potential second car for families with the means to acquire one. In this incarnation, it was a somewhat revolutionary, high-quality small car, with some above average features. Later the concept evolved into a kind of ultra-economy car with some cheaply and poorly-executed, design features as a utilitarian vehicle, like some of the Eastern European marques of the time like Škoda, Yugo and later Lada, which were relatively low-cost economy cars, popular with British consumers. At one point the basic Hillman Imp was the cheapest new car on the British market, which increased low sales figures for a time.

At launch the innovative design of the Imp was underdeveloped, in part because of UK Government pressure to start production quickly in response to the job losses in shipbuilding. Mechanical and cooling system problems were commonplace in the early cars. At the end of 1965 a major revision to the Imp was introduced, effectively splitting the marque into Mk I and Mk II cars. The Mk I Imps had a pneumatic throttle linkage and an automatic choke, both of which were replaced by more conventional items on the Mk II. The Mk II also had improved front suspension geometry and several trim and detail changes. Although the car was constantly improved over its production life, there was no single change as significant as that in 1965.

A further upgrade took place in 1968. The instrument panel and steering wheel were redesigned. The large speedometer previously positioned behind the steering wheel was replaced by a horizontal row of four circular dials/displays of varying detail and complexity according to the model specified. The right-hand dial, the speedometer, was now to one side of the driver's normal sightline, while one multi-functional stalk on the right side of the steering column replaced the two control stalks that had been directly behind the steering wheel, one on each side.The earlier Imp had been praised for the good ergonomic quality of its dash-board/fascia, and its replacement reflected similar trends in other new and modified UK vehicles at a time of "production rationalization". On the Imp, the more modern arrangement was seen by some as a missed opportunity.

The initial problems damaged the Imp's reputation and popularity trailed off, with half of all production being from the first three years. It still sold thanks to its competitive price, distinctive styling, and cheap running costs, but sales never lived up to expectations for what had become a very competent small car. Another problem that contributed to the reputation of poor reliability, was the lack of understanding of the maintenance needs of alloy engines by owners and the motor trade in the 1960s. It was overshadowed in popularity by the Mini. Although the Mini initially sold poorly, by the mid '60s it was the 'in' thing to have, whereas the Imp never enjoyed such status as a fashion statement.

The company's huge investment in both the Imp and the Linwood production plant was to be a significant part of the demise of the Rootes Group. The Imp's commercial failure added to the major losses suffered by Rootes, although the main reasons for these losses were unresolved industrial unrest and the effects of the link with the Chrysler Corporation of the USA. The link was initiated by Lord William Rootes in 1964 as a partnership, but he died in October of that year and by 1967 the company had been acquired by Chrysler, to become part of Chrysler Europe. A year later, ahead of the 1968 London Motor Show, the recommended retail prices of most Imp models were reduced for the domestic market by more than four per cent, despite the general price inflation affecting the UK. Chrysler stewardship was blamed by some for the demise of the Imp in March 1976, after fewer than 500,000 had been built, but the entire Chrysler Europe operation was not a success and two years later it became part of Peugeot.

The Linwood plant was closed in 1981. The Ryton assembly plant continued in operation until 2006, manufacturing Peugeot 206 models, when the new 207 production was controversially moved to Slovakia with EU subsidies.

Approximately half a million, half of this number coming in the first three years of production. The Imp used a derivative of the Climax FWMA engine whereas the Lotus cars used an FWMC engine with had an entirely different cylinder head.

Unassembled cars were exported for assembly in Ireland, New Zealand, Portugal, Venezuela, Uruguay, Costa Rica, South Africa and Australia. New Zealand cars were assembled as Hillmans by Chrysler/Hillman importer Todd Motors from about 1964 for several years in the 1960s. The model returned, this time as a four-headlamp Sunbeam with the newer dashboard, around 1970 but was only offered for about two more years. 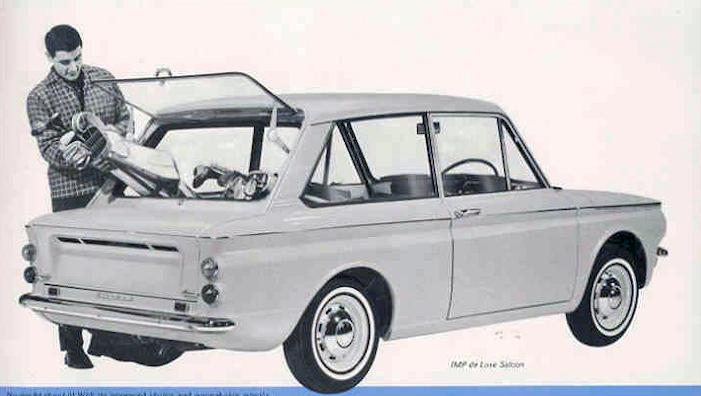 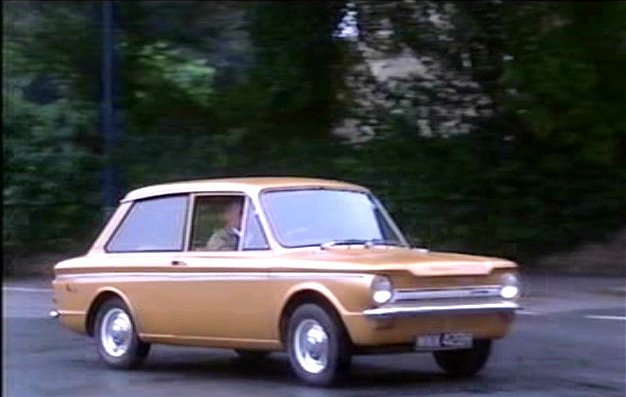