Automotive manufacturer Greece From 1957 on 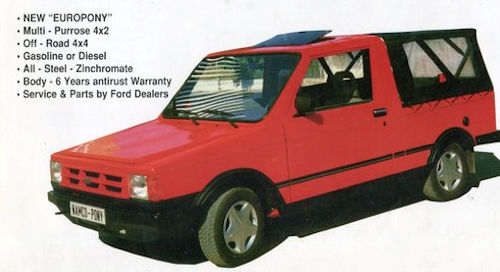 Namco or Namco Motors is a Greek company from Thessaloniki in the field of automotive engineering, which produced vehicles from the 1950s. The best-known product was the Citroën Pony .

Petros Kontogouris acquired in 1957 the license to produce a vehicle developed by Wilfried Fahr in Switzerland . In 1961, the company FARCO was founded, which produced the Farmobil . The company was bought in 1963 by Chrysler and renamed Chrysler Hellas , 1967, production was discontinued. Kontogouris has already negotiated the license production of a NSU Fiat , but decided to develop the pony in cooperation with Citroën . In 1972, the Citroën pony presented, which became a great success. The car was exported to many countries, including Germany and the USA. 1983 the production was stopped. In total, 17,000 copies were created.

Namco then tried to get orders for the production of military vehicles, such as the heavy Namco Milicar 6x6 , and built prototypes, but could not convince in this area. The order went to the company ELBO , which then produced the Steyr 680M as Steyr Hellas . Only the lighter Namco Panther 4x4 was ordered, which did not lead to a permanent utilization of the production.

1985 followed the Namco Pony Super with a Ford engine . From this model were made until 1994, a few hundred copies. The model was in Bulgaria at Namco-Bulgaria made.Officially, Namco did not stop vehicle production in 1994, but has not produced any vehicles, except for prototypes. In 2011, a Pony Super was presented, this time with a Peugeot engine .

The company continues to exist as an importer of trucks.