The Goliath Goli was a pickup truck of the Borgward Group , built by the Goliath plant in Bremen from 1955 to 1961. He replaced the Goliath GD 750 and was the last built in Germany three-wheeled trucks . The sales figures have been decreasing since 1957, so that only 9904 Golis were produced.

With three wheels and a water-cooled two-cylinder two-stroke engine, the Goliath Goli continued a design that has long been a thing of the past for other vehicle manufacturers. Decisive for the use of only three wheels was the about 30% lower production price of the vehicle. From the competitor Tempo Hanseat and some primitive constructions, the Goliath Goli was distinguished by a sophisticated, relatively modern design. Rear-wheel drive with small wheels and large-volume tires (6.40 × 13) arranged behind the front wheel ensured optimum stability and safe driving conditions for a load-reversing tricycle.

First, an air-cooled engine with 12.5 kW was installed, but in which thermal problems occurred. Therefore dodged from 1957 on a motor with water cooling. Its engine output was quite modest at 11 kW for a three-quarter tone - at full load, the driver saw himself with a power to weight ratio faced by 160 kg / kW. To avoid further bad criticism, Goliath offered the free exchange of air-cooled engines. U-profile frame, swing arm with quarter - elliptical spring front and rigid axle with progressive leaf springs at the rear, worm steering, hydraulic three-wheel brake, hand brake acting on rear wheels and all-steel cab were further constructive details. The electric starter (6 V) was meshed using a hand lever. 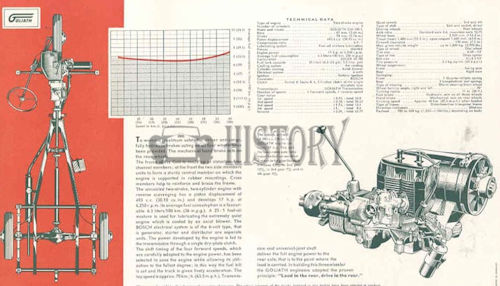 The flatbed version was available in a low and a high version. The former allowed a loading volume of 6 m³. There was also the all-metal van and a box body. The outside dimensions of the case were 2200 mm × 1460 mm × 1230 mm. Depending on the body and tires, the payload varied between 0.75 and 0.95 tonnes. 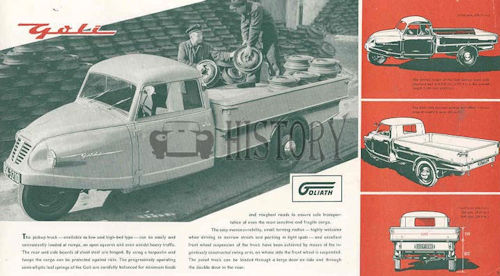