Automotive manufacturers Bremen; Germany from 1931 until 1963

Goliath-Werke Borgward & Co. was a German car manufacturer started by Carl F. W. Borgward and Wilhelm Tecklenborg in 1928, and was part of the Borgward group. Goliath was based in Bremen and specialized in three-wheeler cars and trucks and medium-sized cars. Their vehicles were sold under the Goliath brand.

Together with his partner, the merchant Wilhelm Tecklenborg , Carl FW Borgward founded the company Goliath-Werke Borgward & Co. in 1928 . Under a law passed in 1928, motor vehicles with less than four wheels and cubic capacity of less than 200 cubic centimeters were allowed to drive without a driver's license and were exempt from tax.  The first models were thus the three-wheeled developments of the company Bremer Kühlerfabrik Borg Ward & Co. built: Goliath Blitzkarren (2.2 hp) and from 1931 the first passenger car, named Goliath pioneer , also with three wheels. The "pioneer" has a single cylinder -Two-stroke engine of the ILO engine works in the rear (198 cc, 5.5 hp) and three-speed gearbox; Maximum speed 60 km / h. The body is made of imitation leather covered wood and rests on a sturdy frame made of U-profiles. By 1934, about 4,000 of these microcars were sold in various body styles. The pioneer is regarded as the forerunner of the rear-drive Hansa models 400 and 500. 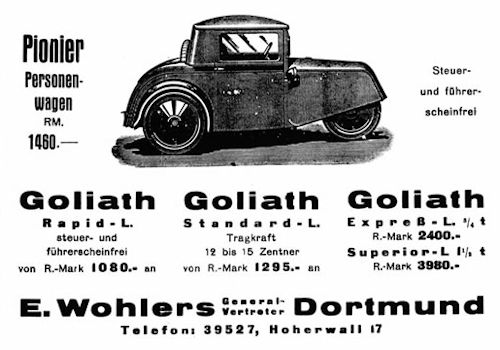 In an air raid on Bremen in October 1944, the plant had been destroyed. But just a few months after the end of the war, reconstruction began. At first handcart and bicycle trailer were produced.

In September 1949, Goliath-Werk GmbH was founded as an independent subsidiary of the Borgward Group. The registered capital of 100,000  DM applied to half Carl F. W. Borg Ward; 40,000 DM belonged to his wife Elisabeth and 10,000 DM to Friedrich Kynast. After Kynast's death in 1950 Borgward took over from his heirs the share at par.

In the same year 1949 brought Goliath the tricycle van GD 750 (750 kg payload) on the market, which was very popular with small traders and with a price of initially 3425.00 DM quickly became a sales success. Adjusted for inflation in today's currency, this equates to 8,500 euros.  The DG was the more modern 1955 Goli replaced. These three-wheeled, simply constructed and inexpensive Goliath vans belonged to the fixed street picture of the post-war period in Germany and contributed significantly to the economic miracle .

With a streamlined three-wheelers with 700 cc two-stroke engine, which under the Technical Director August Momberger had arisen  , took Goliath 1951 at the Autodrome de Linas-Montlhéry in France 38 world records in the newly created classes for tricycles up 750 to 1200 cm³, it was driven 19 times. The most important records were the two hours with an average of 155 km / h and the 2000 miles with 130 km / h. The drivers were Hugo Steiner, Adolf Brudes , Hans-Hugo Hartmann , Otto Koch-Bodes and Helmut Polenskyfrom. In another record attempt with the three-wheeler on the Hockenheimring accident Hugo Steiner deadly.

The purpose of such records was to raise awareness for the production vehicles.

The developed from 1954 off-road vehicle Goliath Jagdwagen Type 31 should open the military sector to the company, but could not convince in the test drives in Lübeck at the Federal Border Police and in January 1956 in Andernach in the Bundeswehr . The refurbished model 34 with four - stroke boxer engine in 1957 came too late because the decision had already fallen in favor of the DKW Munga .

The car model Goliath GP 1100 with four-stroke engine was offered starting from 1958 under the name Hansa 1100 , in order to avoid the low image of the mark caused by the two-stroke three-wheeled vehicles .

These were front-wheel-drive two-door sedans, station wagons and coupes. 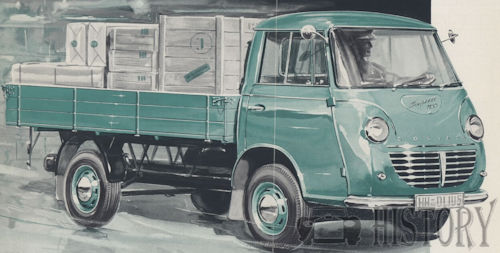 From 1958, the Goliath 1100 models were sold under the brand Hansa; the Borgward group wanted to downplay the two-stroke engine and three-wheeler image.