Commercial vehicle manufacturer of Germany From 1905 to 1928. 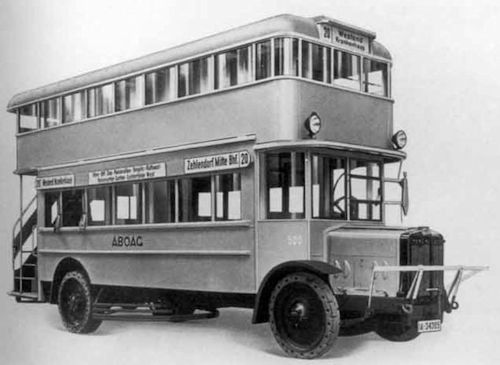 Aligemeine Berliner Omnibus AG, trading as ABOAG,a established transport  company in 1868  entered the bus-building field by converting a horse-bus into an experimental battery bus bodies on various chassis , and later complete vehicles from 1913 also Trucks and tractors, all with Berlin bus operator. The double-decker known as the 'RK- Car', which remained in production until 1917 at the end of the first world war. Production resumed in the 1920s as BVG.

Many of the smaller bus companies that existed in Berlin until 1868 had economic difficulties due to the great competition; in 1864, for example, there were already 36 bus companies. The company was founded on June 25, 1868 with share capital of one million thalers , and on July 1 it began operating horse-drawn buses.  The company already had 257 drawn omnibuses and 1089 horses .

In 1897, ABOAG manufactured its own omnibuses by placing the bodies of horse-drawn omnibuses on chassis that were provided with electric drives On June 13, 1906, a Büssing omnibus and from July 3, 1907 also a first "deck seat" omnibus with 19 lower and 20 upper seats. In total, the deck seat omnibus had space for 42 people, the entrance was at the rear, on the platform there was an iron spiral staircase for the places on the roof.

The electric tram-omnibus presented in collaboration with Siemens & Halske in 1898 was an unsuccessful project . It was a mixture of electric tram and battery- powered bus , the two-way vehicle could move both on and off the tram network .

In 1913, their own omnibuses with gasoline engines were built according to plans by General Director Richard Kaufmann, most of which were manufactured as deck seat cars. They received the designation "RK" after the initials of the director.

In 1924, ABOAG developed new buses with a closed upper deck together with the commercial vehicle manufacturers Büssing and NAG . These four-meter-high, double-decker omnibuses , which had also been tested with pneumatic tires , had a low-floor frame, the steering on the left and the entrance on the right. 350 such buses came into operation in the near future. In 1927, Büssing developed new three-axle or six-wheel double-decker chassis, which were fitted with double-decker superstructures that could carry up to 82 people. Back then they were the largest omnibuses in the world. 100 buses of this type of bus were immediately ordered in 1928, which now also had heating. That year, the company switched all buses to pneumatic tires. In 1929 Büssing started a maintenance and repair company with 50 employees in Berlin-Halensee . set up for the new BVG.

From 1928 two buses with a Maybach six-cylinder engine and front-wheel drive were built by the BVG in cooperation with Richard Bussien (owner of Voran-Automobilbau in Berlin-Wilmersdorf).

1926, a high-speed bus service was set up from den Linden to Grunewald and the Büssing bus had a white “E” on a red sign at the top in the front. 1928 the ABOAG already owned 580 buses and had 4,340 employees, of which 1,317 were drivers and 1,235 conductors were. It operated 24 city bus routes with a route length of 253 kilometers, six suburban routes over 52 kilometers and one express route over 11 kilometers. The daily mileage was around 100,000 kilometers, around 600,000 people were transported annually. In 1928 the authorization for passengers to transfer from the S, U and trams to the bus routes was introduced.

In 1925 (possibly as early as 1924) ABOAG acquired the grounds of the Carl Beermann machine factory between Eichenstrasse, today's Puschkinallee, Flutgraben and Spree (opposite the Osthafen ) in today's Alt-Treptow . In May 1925 the main workshop for chassis moved from the Usedomer / Jasmunder Straße depot to the shed roof hall at the Treptower depot. This building was built for the machine factory according to plans by the architect Bruno Buch .

Beermann's foundry, which was no longer usable, made way for a new building. According to the designs by Franz Ahrens , the main bus workshop of ABOAG was built there in 1927 with the associated office wing. The highly rationalized operation required a hall in which the double-decker buses could be maneuvered quickly and easily so that necessary repair work could be carried out as quickly as possible. With a length of 100 meters and a span of 70 meters (7000 m²), it was the largest self-supporting hall in Berlin and one of the largest in Europe . Daylight still falls through the skylights todayand the glazed front sides of the hall. On February 15, 1928, operations began in the hall; the last interior work dragged on until June. An extension was carried out according to plans by Alfred Warthmüller. Today the area is known as “ Arena Berlin ” and is a cultural and event site.

The two major competitors, the Society for Electric Elevated and Underground Railways in Berlin and the Great Berlin Tram , each acquired larger shares in ABOAG around 1913, so that the prerequisites for coordinating the various modes of transport were favorable. On December 10, 1928, these three companies were incorporated into the Berliner Verkehrs-AG (BVG) .