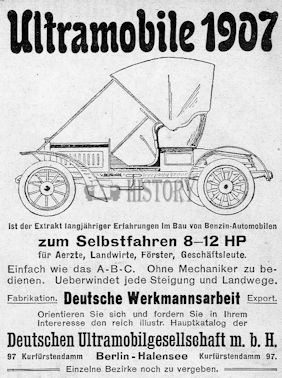 The German ultramobile company was an automobile manufacturer, which was located between 1903 and 1908 in Berlin-Halensee .

In 1903, the company began as a German agent for Oldsmobile . Offered was the model Curved Dash .

From 1904, a copy of the car was offered as Ultramobile (note the American spelling, analogous to Oldsmobile ). The runabout with two seats had a single cylinder - four cycle engine with 1570 cc capacity which was installed behind 8 to 12hp(5.9 kW), which were passed through a two-speed planetary gear and a chain to the rear axle. Typical was the forward curved bulkhead.

The car was manufactured on behalf of the Fahrzeugfabrik Eisenach and marketed as a "miracle of German technology". In 1906, the production was relocated to the Berlin-based company WA Boese & Co. (not to be confused with the automobile manufacturer Boes & Co. ).

Also starting from 1906 began the construction of a car with two-cylinder front engine , which developed 12 HP. This was an original design that had nothing to do with the Curved Dash anymore.