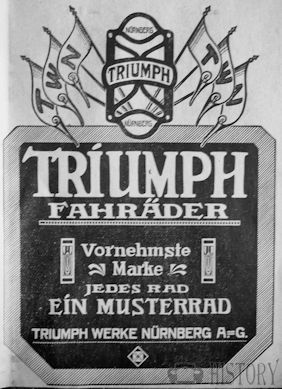 The Triumph Werke Nürnberg AG was a German motorcycle and office equipment manufacturers, under the name New Triumph Co. Ltd. , 1896 in Nuremberg, a subsidiary of the motorcycle manufacturer Triumph Motorcycles Ltd from Hinckley , UK was established. The company was part of the Nuremberg motorcycle industry and set in 1956, the two-wheeler.

1903 began the production of motorcycles with built-in engines of Minerva , Fafnir and Peugeot , which was discontinued in 1907 due to lack of demand in the German Reich.

In 1911, the company changed its name to Triumph Werke Nürnberg AG (TWN) . In 1913, it separated from the parent company in England.

In 1933, the company also manufactured automobiles . The only model was a tricycle . At that time, such vehicles were tax-free. The driven motor with 350 cc capacity , which drove the single rear wheel. The coupé body could accommodate two people. The number of copies produced remained low.

During the Second World War, the production was limited by the Schell Plan to the double piston model BD250.

After the Second World War, the production of motorized two-wheelers was resumed in 1948 with the pre-war model B125 motorcycles .