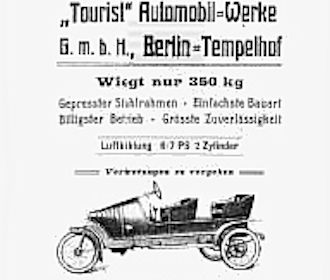 The company from Berlin-Tempelhof began in 1907 with the production of automobiles. The brand name was Tourist  1911 the company was renamed, by 1920 ended production.

The company made tricycles with the single wheel in the front. The engine was mounted behind the front wheel.

The choice was a model 6/7 hp, an air-cooled V2 engine and the model 5/10 hp a four-cylinder engine . Unlike similarly designed vehicles, the engine was completely inside the body. The advertisement was: The most perfect tricycle trolley of the present. The chassis was made of pressed steel .