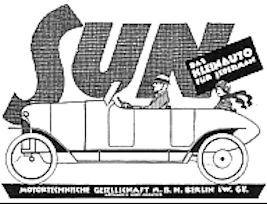 The Sun Motorwagen-Gesellschaft mbH E. Jeannin & Co. KG was a German car manufacturer, which first existed between 1906 and 1908 in Berlin-Charlottenburg .

Paul Jeannin retired from the Argus Motoren Gesellschaft in 1906 and founded the company together with his brother Emil . They produced various passenger cars and commercial vehicles, all in the upper price segment. In 1908 the company was dissolved.

The company produced small cars. The drive was provided by air-cooled V2 engines . The vehicles offered space for two people in a row.