Vehicle manufacturer Gaggenau Germany from 1905 to 1910 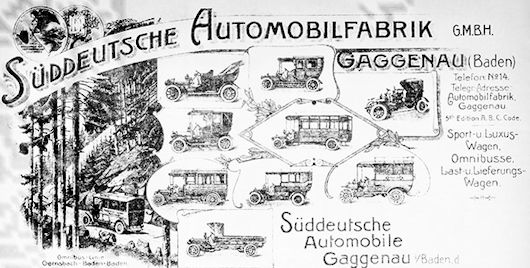 The South German Automobile Factory , also called "SAF" for short , in Gaggenau was a German automobile and bicycle manufacturer. The company was founded in 1905 in the legal form of a GmbH , which existed until 1910 and in the Benz & Cie. AG  a comprehensive interest agreement and a participation of the Benz & Cie. AG at the SAF. As a result, Benz had a wide range of products, and truck and bus construction was concentrated in the SAF plant.And transformation of the SAF into the "Benz-Werke Gaggenau GmbH" in 1912. At times, the "Benz-Gaggenau" brand was used for the trucks. The Benz plant in Gaggenau belonged to Daimler-Benz AG since 1926 and is still part of Daimler AG .

In 1894, Theodor Bergmann founded an automobile factory in addition to his since 1883 developed industrial plants. 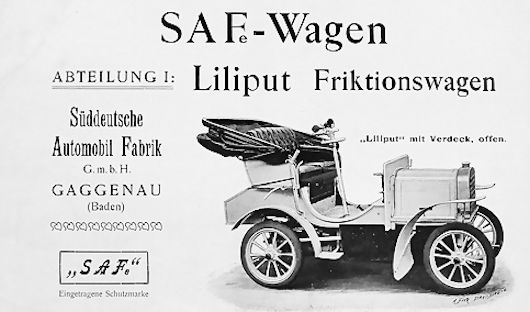 In 1894, after the plans of the engineers Joseph Vollmer and Willy Seck, passenger and delivery vans as well as an 8-hp bus were produced. 1904 followed by a small car, which was offered under the brand Liliput .

In 1904, Georg Wiss acquired the company, which was converted into the Süddeutsche Automobil-Fabrik GmbH in 1905 and continued to build commercial vehicles. In 1905 SAF built the first large-capacity bus with 52 seats for a Berlin transport company. Subsequently, the first petrol engine fire engine.

From 1907, military vehicles with 5 t payload, telegraph pole or long-material transporter were manufactured. It was exported to other European countries and to Central America under the brands "Gaggenau", "SAF" and "SAG".