Automotive manufacturer Germany from 1969 on 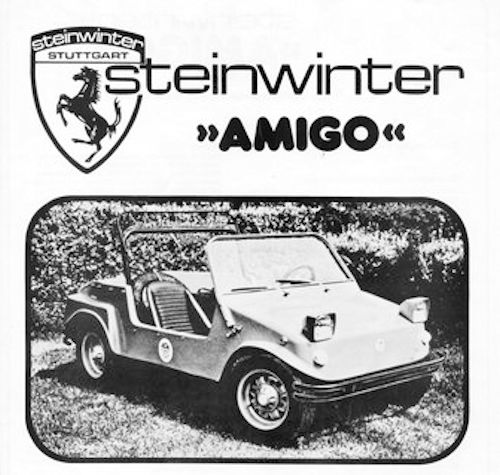 The Steinwinter GmbH is a German company in the automotive industry .

Around 1969, the Stuttgart- based manufacturer began producing automobiles. The brand name was Steinwinter . Around 1987 ended the series production. Today, the company is active in the field of special vehicle and prototype construction.

The first model was the Amigo , an open leisure car in the style of a VW buggy , but on Fiat basis. The floor assembly consisted of sheet steel. The engine came at least in the later years of the Fiat 126 . Production continued until about 1982.

At about the same time, the Junior model was on offer. The body corresponded to the Fiat 500 . The drive was provided by the two-cylinder two - stroke enginef rom the Goggomobil with a displacement of 247 cc and 13.6 hp .

Successor of the Junior was 250 L , called Figo (Fiat / Goggomobil) In this model, the Goggomobil engine was in the more modern body of the Fiat 126 mounted. At least in the 1986 model year was also a small four-stroke engine with 250 cc displacement available.

The last model called Junior 50 was a microcar with an independent body. The drive was provided by an air-cooled single-cylinder two-stroke engine from Fichtel & Sachs with a displacement of 50 cc and 4.5 hp.