Vehicle manufacturer Augsburg Germany from 1990 to 1999 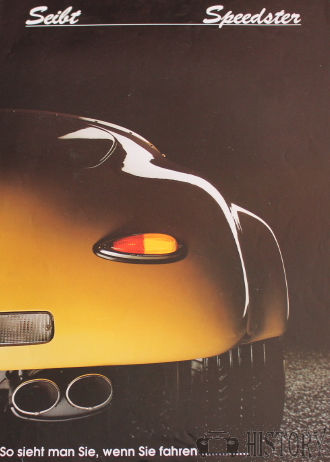 The Speedster Center Seibt was a German manufacturer of automobiles .

Richard Seibt founded the company. The company headquarters was at Ulmer Straße 75 in Augsburg . From 1988 he produced conversions. in 1990 started the production of automobiles. The brand name was Seibt .

Initially, the offer consisted of conversions based on the VW beetle . The model Seibt-Speedster was an open two-seater that still clearly resembled visually the beetle. These vehicles were based on VW in 1200, 1302 and 1303 available. The price of a Rohumbau with hood was 6,400 DM . complete vehicles cost from 14,900 DM.

1990 followed the RS 1 Classic and the RS 2 Classic .  These were replicas of the Porsche 356 Speedster . The chassis of the VW Beetle was used. insured for the drive motors from the VW Golf and Passat .

From 1992, a model was available that resembled the Porsche Spyder . Here the chassis consisted of a galvanized steel frame.  A boxer engine with either 90 or 132 hp power drive to the vehicle.