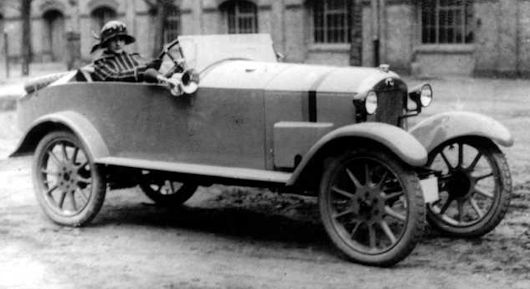 The Autowerke Peter & Moritz AG was a German company for the production of automobiles , which was founded in 1919, moved its headquarters in 1922 from Eisenberg (Thuringia) to Naumburg (Saale)and there went bankrupt in 1925.

The Eisenberg businessman Paul Peter and the engineer Karl Moritz from Berlin founded on 25 March 1919 the company Automobilwerke Peter & Moritz  for the operation and repair of motor vehicles . Already in November 1919 the enterprise was converted into a corporation . The operations manager was engineer Wilhelm Gehring (also Willi Gehring ). On June 23, 1920 was Peter, Moritz and Gehring at the Reich Patent Office a motor vehicle registered as a utility model , later a successful 600 km test drive took place. The end of 1922 they moved to a site in Naumburg and produced with up to 300 workers.

Under the competition of a large number of small car manufacturers, the company came more and more into financial difficulties. In March 1925, the ownership of the machines was formally transferred to the creditors. With a number still unfinished automobiles left. Bankruptcy had to be declared in December 1925 . In total, an estimated 500 to 800 vehicles were created.

Under the brand Peter & Moritz a touring car with 5/15-hp engine and a sports car with 5/20-hp engine were built.