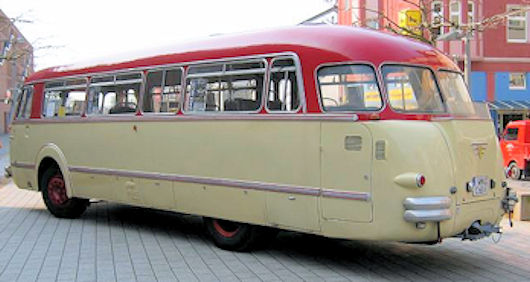 The Northwest German Vehicle Construction GmbH (NWF)  was a coachbuilder, commercial vehicle manufacturer and car manufacturer based in Mariensiel near Wilhelmshaven.

NWF was founded in 1946 and initially engaged in the production and repair of transport vehicles, trailers and railway spare parts. From 1948, buses were built on chassis of Ford , Borgward and Büssing . One year later, Krauss-Maffei joined the company. And with aircraft designer Henrich Focke , they jointly designed the lightweight bus KML 90 with self-supporting lattice construction and stern engine in streamlined form, which was presented at the IAA in 1951.

NWF marketed the light metal bus with Ford Hercules diesel engine as NWF FS (Ford Schnellbus), with Deutz diesel engine is as NWF BK 4 ( B us klein with four-cylinder engine F4L 614), as BK 6 and BS (with six-cylinder engine F6L 614) , The NWF prototype of 1951 still had a 95 hp Ford gasoline engine with eight cylinders .

In the same year, two prototypes of a bus were built for the Deutsche Bundesbahn under the name Schi-Stra-Bus . These two-axle buses could drive normally on the road. Due to the hydraulic lifting of the vehicle and then putting each bogie with railway wheelsets front and rear, it was also suitable for track. The drive on the rail took place over the tires the rear axle, while the steering of the front axle was locked. There were 50 ordered. However only 15 of these two-way vehicles were actually used.

In addition, the company was active as a bodybuilder . Above all, chassis for buses, especially trolleybuses (also double-decker for the HHA ), but also the bodies of the battery electric parcel post for the German Federal Post of Lloydand Maschinenfabrik Esslingen . 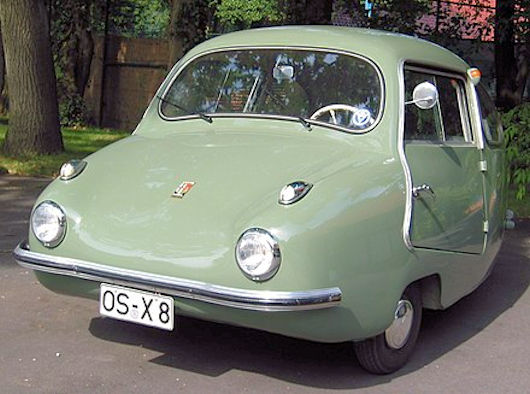 In addition, between March 1954 and August 1955 the Fuldamobil was produced under license and sold as Fuldamobil NWF 200 , for which an assembly plant was built in Lohne . There were 701 copies.

The NWF and Krauss-Maffei agreed to terminate the cooperation on January 1, 1955. On November 18, 1955, the NWF had to file for bankruptcy.