Automotive manufacturer Hamburg,Germany From 1934 to 1936. 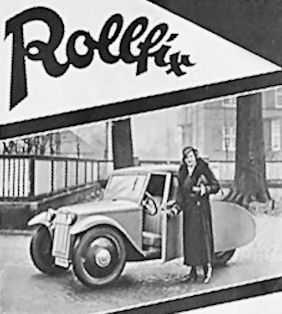 Rollfix was a German car brand from the 1930s

From 1926 to 1934, the "Rollfix" three-wheeled vehicles with a 200 cc two-stroke engine from the ILO-Motorenwerke were manufactured in the Rollfix express rolling stock GmbH in Hamburg-Wandsbek . The construction of the car was an attempt to withstand vehicle development. After the first smaller models, the so-called "Eilwagen" were developed. All with push-pull, open engined.

The two and three seat, three-wheeled vehicles were similar to the Fuldamobil . Technically, the current motor vehicle tax regime, which granted tax exemption under certain conditions, was taken into account in order to increase the attractiveness of the sale. The cars were also sold under the name "rekord". The brand logo was round and showed inside a stylized rising sun with the name "Rollfix" in the middle.

In 1934, the Rollfix works Frederic Schröder KG took over  the production and used the brand name Motrix .