Vehicle manufacturer Dusseldorf Germany from 1923 to 1926 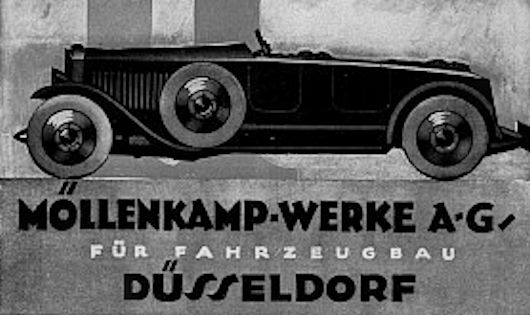 The Möllenkamp-Werke AG  was a German automobile manufacturer based in Dusseldorfwas . Between 1923 and 1926 middle class cars were built there under the name Mölkamp .

At the beginning of 1923, the Priam car factories in Cologne-Zollstock had been taken over and for the rest of the year the models 8/24 hp and 9/30 hp were being built under the name Priamus . Soon after, the six-cylinder car developed by Priamus , a 10/50-horsepower model with a vertical shaft engine - the first Mölkamp - was added. Because of the high price of this high quality car but found little appeal in the market.

In order to offer a cheaper model, built from October 1924 the four-cylinder model 6/30 hp of  the Italian car manufacturer Ceirano under license. But also, the Mölkamp-Ceirano was too expensive and could not prevail in the market, so that the company had to file for bankruptcy in February 1926.