Vehicle manufacturer Bremen-Schönebeck Germany from 1962 to 1964 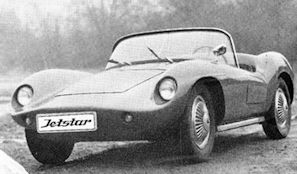 MCA is a former German manufacturer of automobiles .

The company MCA Automobile Works Ulrich Otten from Bremen-Schönebeck began in 1962 with the production of automobiles. In 1964 production ceased.

The model Jetstar was an open two-seater with a body made from fiberglass , whose four cylinder - piston engine of 1198 cc displacement 45 PS developed. The Coupé Jetkomet had an engine with 1493 cc and 65 hp. In both cases, the engine came from VW and was mounted in the rear. The vehicles were also used in car racing.