Automotive manufacturer Elbing Germany from 1913 to 1930 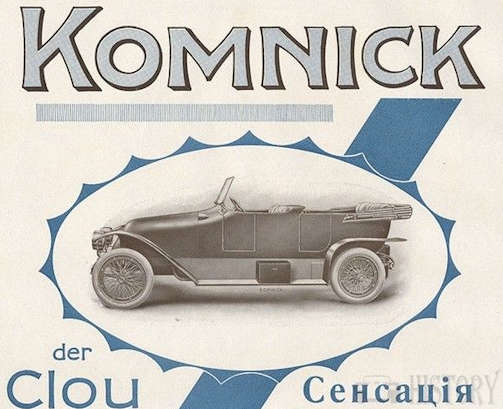 The Franz Komnick and sons AG (in the export also under the designation Komnik admits ) was a German commercial vehicle manufacturer from Elbing in former East Prussia (until 1920 to West Prussia ), which was busy between 1913 and 1930 mainly with the construction of light and medium heavy trucksand Kraftomnibussen , Besides trucks, the company introduced to its heyday 2,000 employees cars and power tractors . The company was bankrupttaken over in 1930 by Büssing AG and continued as a separate factory. The production ended on 23 January 1945 with the occupation of Elbląg by the Soviet Red Army , with most of the employees and their families making their way to the west with the last finished trucks and buses.

The company was founded by Franz Komnick in 1906 as a machine factory and was based in Elbing. 1913 began in the run-up to the First World War, the construction of trucks for three and five tonnes of payload , which were initially used almost exclusively for military purposes, after the First World War but were continued in civilian version largely unchanged. In 1920, Elbing came in the course of the cession of West Prussia to the resurrected Poland to East Prussia, which ensured the continued existence of the business. From 1922 a new truck program was presented, which ranged from 2.5 to 5 tons payload. These vehicles were designed by Josef Vollmer . In 1929 the Komnick PT tractor was introduced based on the Benz-Sendling BK .

While components were initially sourced from other companies, all assemblies were gradually manufactured in-house, including their own engines . The heavy 4.5 t truck was equipped with a series - six-cylinder - petrol engine of Maybach equipped. In 1925, the Komnick truck program was revised and it appeared a 2.5 t fast truck with low-frame construction , which could be used for the construction of omnibus construction. In the same year, the Komnick truck successfully on the so-called Russian test drive ( Russia trip) over 2000 km participate and the five-ton trucks were sold very well in the civilian area. Quite a few went to export to the Soviet Union , where they were known as Komnik . At that time, the company had about 800 employees. In 1926 it was equipped with state-of-the-art machinery and had its own frame drawing shop and foundry .

Despite technically advanced constructions, the company fell into the red due to the global economic crisis and had to go bankrupt in 1930, after a promised state credit was withdrawn. This was not insignificant because the company had concentrated mainly on the rather underdeveloped regional market in East Prussia and the surrounding area and could no longer work profitably. As a result, the plant was still in 1930 by the Büssing AG, which had already bought in the same year, the National Automobile Company (NAG) from Berlin and was from January 1, 1931 Büssing-NAG United Nutzkraftwagen AG , and initially under the name " Büssing-NAG plant east "(Elbing) continued.

Here a few Komnick vehicles from the previous program as the truck tractors were directed by Bussing initially continued to be built in a revised form, then bodies developed and bodies for Büssing-buses, including from 1936 superstructures for the first production units of the Trambus as a forward control with underfloor engine of Types 650 TU (two-axle) and 900 TU (three-axle). 1938 was followed by a series of biplanes type Büssing-NAG 900N for Hamburg , Munich and Braunschweig and Busanhänger, The name Büssing-Elbing was informally used for the Büssing buses manufactured here .

During the Second World War from the autumn of 1939, the construction of Büssing buses and trucks continued, with the factory and the town of Elbing being almost completely spared war damage. The buses and trucks for civilian use were mainly converted to wood gas propulsion.

The factory was completely dismantled after the war by the Soviets, where they spent all facilities as so-called "reparations" in their own country, so that it was lost for Büssing-NAG (from 1949 again as Büssing AG ).