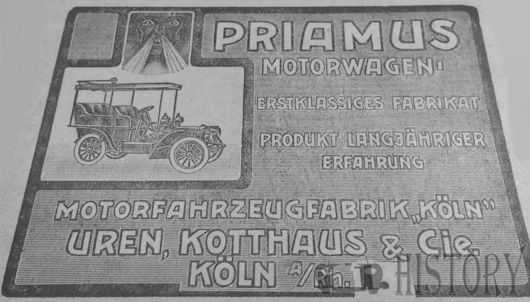 The Kölner Motorwagen-Fabrik/Priam-automotive GmbH was a German automobile manufacturer from Cologne.

In 1897, the Cologne Motor Vehicle Factory GmbH (formerly Heinr. Brunthaler) was founded in Cologne-Sülz . 1903 was renamed the motor vehicle factory in Cologne, Uren, Kotthaus & Co. After a bankruptcy, the company was re-founded in 1910 as Priam-Automobilwerke GmbH in Cologne-Zollstock . In the spring of 1923 the company was taken over by Möllenkamp-Werke AG for vehicle construction in Düsseldorf .

First three-wheeled vehicles were built under license from the French manufacturer De Dion-Bouton , from 1900 also the Voiturette De Dion-Bouton Vis-à-vis with four wheels and four-stroke single-cylinder engine with 6-8 hp (4.4-5.9 kW) , The two-speed gearbox was switched with a lever on the steering column and the engine power from the transmission to the rear wheels via a belt passed.

At the beginning of 1910, a new foundation was established by a Cologne bank consortium under a new name in Zollstock. The production of midsize cars ran until 1914, when the First World War ended the activities initially. After the war, production was resumed in 1919 with an 8/24-horsepower model. In 1920, a sportier 9/30-PS model was added. A six-cylinder model with 10/50 hp was developed, but then no longer released before the takeover by Möllenkamp in 1923.