The Kölner Accumulatoren-Werke were a manufacturer of batteries and electric vehicles in Cologne-Kalk . Already in 1827 the company was founded as Accumulatorenwerke Gottfried Hagen . By 1884 the production of batteries started there .

Between 1904 and 1908 there were electric-powered passenger cars and trucks under the name KAW (passenger car) and Urbanus (commercial vehicles).

In 1908 they stopped the production of electric vehicles, as gasoline-powered cars on the market became more popular. 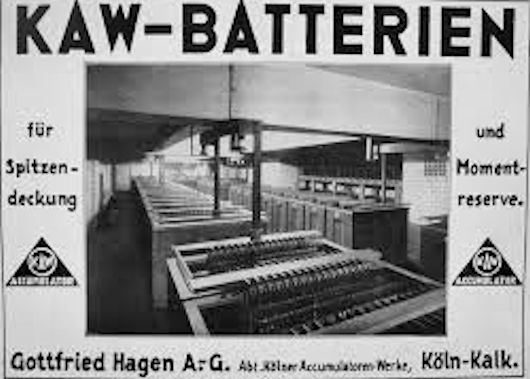 Around 1900, the company Hagen built 1.5 to 2.5 t electric trucks . They were powered by two 4hp hub motors that powered an 80 volt battery. For the axle mechanism a patent of the French company Krieger was used. The chassis were sourced from Scheele .

1908, another electric truck 5 t type was built, which was equipped with four wheel hub motors with a total of 7 hp. The batteries were partially installed under the bonnet and under the seat. Another heavy e-truck was built with four hub motors up to 11 hp.

Similarly, light electric-powered buses, municipal vehicles were built.The Urbanus was available as a fire engine or ambulance or as a truck . By 1908, about 1500 pieces were created.

The KAW were luxury and business cars, each with two electric motors , which allowed four different speeds up to 30 km / h depending on the circuit. The range was 100 km.