Automotive manufacturer Germany from 1931 to 1939 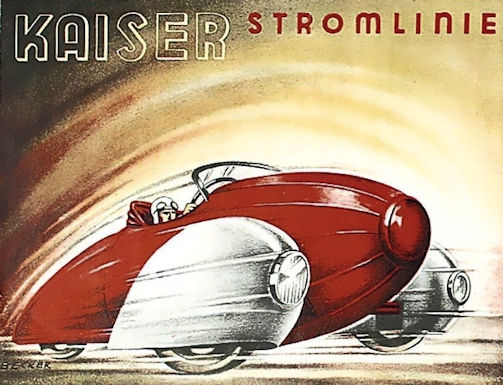 Kaiser vehicle construction was an automobile manufacturer in Saxony-Anhalt . The company was founded by the aircraft engineer Theodor Kaiser and produced in the 1930s in Oschersleben three-wheeled cars . Around 1939 had to produced armor for the war and ended production.

Theodor Kaiser built his first prototype in Warnemünde in 1931 with tandem seat and interconnect wheels. The rear wheel was driven by a 200 cc motorcycle gearbox.

The construction of the second prototype took place in 1932 in Oschersleben, where Kaiser as a subtenant works premises of C. Schmidt, body and vehicle, in the Moltkestr. At 3.60 m long and 1.85 m wide The seats were mounted side by side and  front wheels with motorcycle fenders.

Then followed a closed tandem with interconnected wheels, with front lights in 1934 the series began with two seats side by side. Various single-cylinder engines of Columbus , DKW , JAP and NSU were installed until Kaiser stayed with the DKW engines.

The bodies were themselves made of wood and artificial leather cover. The front looked like a little zeppelin . Optionally, you could order motorcycle fenders with freestanding lamps or integrated in the body.1936 came out the type G with sheet metal body, where only the front was slightly flattened. Theodor Kaiser kept his car repairs on the water and built in Lehninhis the last automobile, this time four-wheeled and with two Ford Eifel engines for separate off and on. 1939 war production was the end for this car