Automotive manufacturer Lüdenscheid Germany from 1980 to 1993 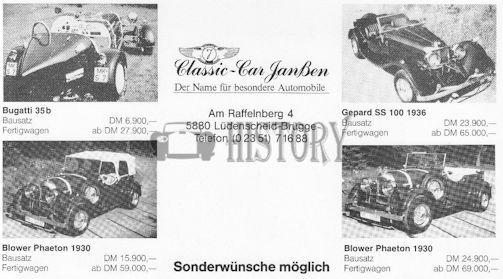 Classic-Car Janssen was a German manufacturer of replica automobiles in the 1980s and early 1990s .

Klaus Janßen founded the company in 1980 and started producing automobiles. The registered office was at Am Raffelnberg 4 in Lüdenscheid . The brand name was Janssen . 1993 ended production.

The company produced replicas of historic vehicles. The vehicles were mostly available as a kit.

Blower Phaeton / 98 was modeled after the Bentley 4½ liter Supercharged from the 1920s . The original price was 1984 from 46,000 DM . The base forming an elongated chassis from Volkswagen Beetle . The drive was powered by a four-cylinder engine from Audi with 86 hp . 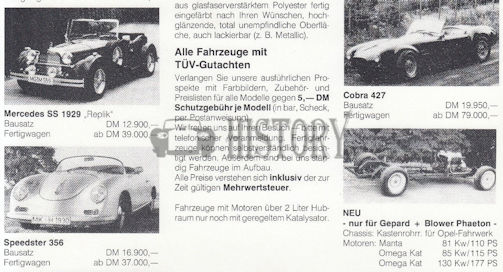 Cobra 427 Turbo was a replica of the AC Cobra . The original price was 1,988 from 50,000 DM. In this model, a separate box frame was used. The choice was a six-cylinder engine from Ford and the V8 engine from Rover .

Gepard SS 100/75 was similar to the SS 100 . The original price was  from 39,000 DM. Initially on the platform frame of the VW Beetle based, later a box frame used. Engines Opel with optional cylinders 4 and 110 hp or 6 cylinders, 3000 cc displacement and 180 PS were mounted in the vehicle forward.