Automotive manufacturer Berlin-Schöneberg  Germany from 1910 to 1923 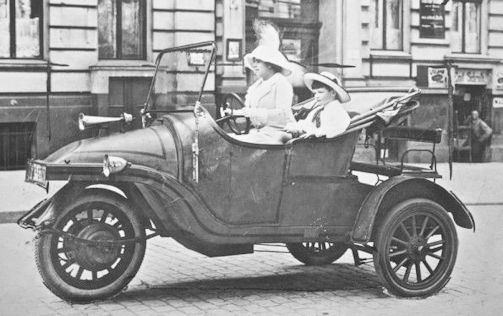 Gebhardt & Harhorn was a manufacturer of electric vehicles, which was based in Berlin-Schöneberg . From 1910 to 1923 there were electric-powered passenger and goods vehicles under the name Geha . The designer was Victor Harhorn, who previously worked for BEF .

It created three-wheeled vehicles with wheel hub motors in single front wheel, which made 2.2 or 4.4 kW. 1911 also appeared a four-wheeled vehicle, the left rear wheel of an electric motor with 4.4 kW or 7.4 kW was driven, as a passenger and as a truck. The top speed of all these cars was 25-30 km / h, the range at 80 km.

In 1917, the company was taken over by the elite works in Brand-Erbisdorf , which from 1919 offered Harhorn cars with the advertising slogan "The electric horse" up to around 1923.