Automotive manufacturer Berlin-Charlottenburg, Germany from 1899 to 1918

The Henschel & Co. electromobile and machine factory Henschel (sometimes called Hentschel ) was from 1899 to 1918 a manufacturer of electrically powered vehicles in the Schillerstraße 97 in the city of Charlottenburg , today a district of Berlin . The first electrically operated taxi in Berlin was built by Henschel.

In 1899, Henschel & Co. was founded to produce machines, electric cars and gasoline-powered vehicles. In 1906 the company was renamed. The first electric commercial vehicles as trucks had two engines and up to 6.5  hp . The electric truck was powered by the rear wheel and could be switched at five speeds. The brake was a block brake and two mechanical brakes. In addition, one could initiate a strong braking in an emergency by "reversing" the two electric motors.

Higher quantities of these electric trucks, especially municipal vehicles , Henschel could produce until the time of the First World War . In 1918 the company Henschel was taken over by the elite works . 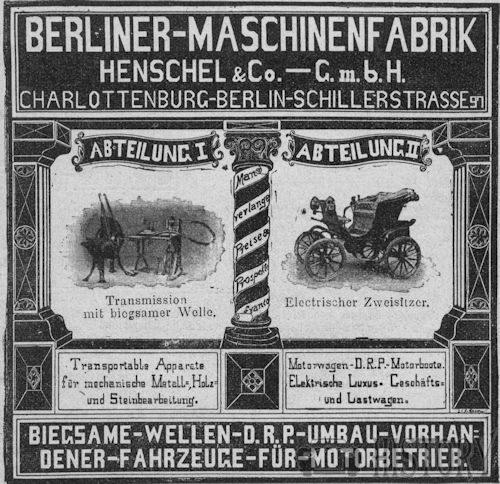