Automotive manufacturer Nuremberg Germany from 1993 to 2011 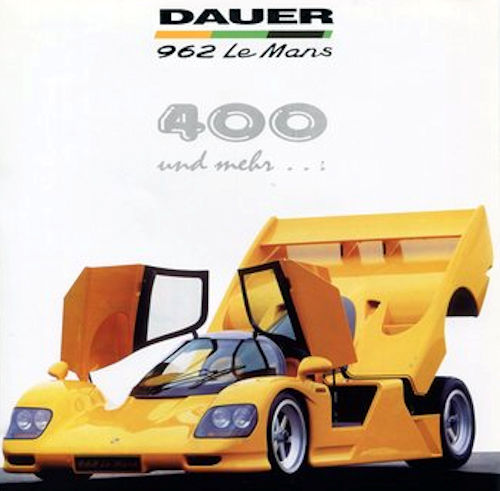 The Dauer sports car GmbH was founded by Jochen Dauer , located in Nuremberg and specialized in the construction of supercars in small series. The company was best known for continuing the production of the Bugatti EB110 and developing the 962 LM based on the Porsche 962 , which won the 1994 Le Mans 24 Hours in 1994 .

Since 1993, the duration 962 LM was produced on the basis of a Porsche model. After 1995, the Bugatti Automobili SpA of Romano Artioli ended with bankruptcy, took over the duration sports car GmbH the bankruptcy estate of the company. This included unfinished vehicles and a large stock of spare parts of the latest development stage of the Bugatti EB110 . Because the Volkswagen AGacquired the naming rights to Bugatti, the cars could no longer be sold under the name Bugatti, but have since been called duration EB110SS. In 2008 Dauer Sportwagen discontinued business operations. The workshop equipment, the original EB110 spare parts, the permanent EB110 SuperSport components as well as some components of the Dauer 962 LM (based on a Porsche 962 ) were acquired in 2011 by Toscana-Motors GmbH based in Kaiserslautern .