Automotive manufacturers Aachen; Germany from 1898 until 1908. 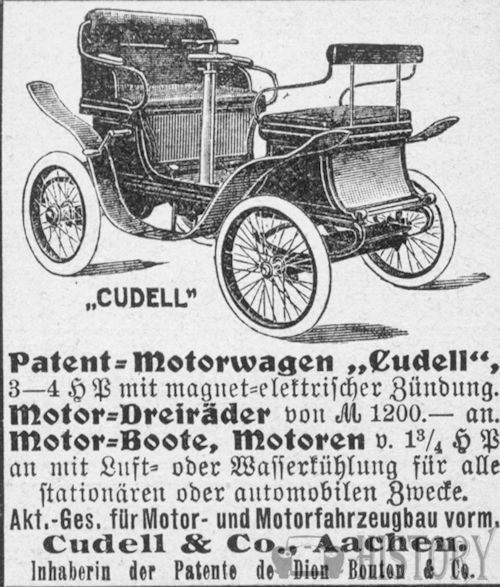 Cudell Motor Compagnie was a German manufacturer of automobiles .

Initially, models were made under license from De Dion-Bouton. The first model was a tricyclewith the single wheel in the front. The driver sat on a bicycle saddle and steered with a handlebar . The single-cylinder engine made 1.75 hp and was mounted in the rear. 1899 followed as the first four-wheeled vehicle license of the Voiturette De Dion-Bouton Vis-à-vis as a motor car 3.5 hp with a water-cooled single -cylinder engine with 402 cc displacement in the rear, which made 3.5 hp. At a wheelbaseof 136 cm offered the vehicle, the front seat was in spite of the vis-à-vis mentioned body shapealso mounted rotated in the direction of travel, space for four people.

1901 appeared the motor car 4.5 hp with 510 cc and 4.5 hp. 1902 followed the strength version of the motor car 6 hp with 700 cc displacement and 6 hp power, also appeared license versions of the slightly larger Voiturette Populaire with front engine and 6 hp or 8 hp. 1903 followed two-cylinder models with 8 hp and 10 hp. Last license model was 1904 a vehicle with four-cylinder engine .

In 1904, under the direction of Karl Slevogt , Cudell developed the 16/20 hp with four-cylinder engine and 2554 cc displacement as its first own development . 1905 followed the Phoenix 35/40 hp with four cylinders, 6100 cc and 45 hp, which should be as Doppelphaeton and sedan . After the bankruptcy in 1905, only a few vehicles were produced.

In the USA, the air-cooled 16-hp four-cylinder with four-speed gearbox, shaft drive, wood / steel chassis with 1892 mm wheelbase and Tonneau body was offered in 1904 for 5 people. The car cost a whopping US $ 4500 and was also available with a water-cooledfour - cylinder with 22 hp. The agency had Clodio & Widmayer at 10 West 33rd Street, New York.

A vehicle of this brand can be visited at Autoworld Brussels in Brussels .

Engineer Max Cudell was with Dr. Ing. Leaning from London in 1902 in his motor vehicle Passe-Partout on a world tour. At first, border problems had caused a delay in the journey. Her arrival in Russia was delayed. Tuesday, October 14, it continued from St. Petersburg . Monday, October 20, the Globetrotters arrived in Moscow. It was already snow.

A used with government aid bought Cudell with 7½ HP 1904 was the first car in Iceland .