Automotive manufacturer Brandenburg; Germany From 1903 to 1933. 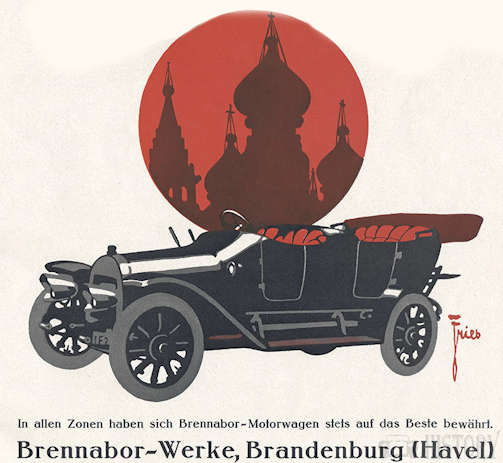 The Brennabor works Gebr. Reichstein , later Brennabor-Werke AG , were a German manufacturer of strollers , bicycles , cars and motorcycles based in Brandenburg on the Havel .  The company's name comes from the allegedly old (but false) name of the city of Brandenburg.

From 1901, the works also produced motorcycles in series, from 1903 cars (initially only on order) with three and four wheels. 1908 began the series production of automobiles. During the First World War , no cars were produced, motorcycles initially only until 1916.

The Brennabor factories operated from 1908 own racing team and achieved great success in motorsport worldwide .

In 1919, the mid-range car type P wasintroduced, for the 1921 mass production began. From the beginning to the mid-1920s, Brennabor had risen to become Germany's largest car manufacturer until 1927/28, still second behind Opel . The enterprise employed 1924 6,000 workers.

Brennabor joined in 1919 under the leadership of Sigmund Meyer with the NAG and Hansa-Lloyd to the cartel of German car factories (GDA) together. This sales organization existed until 1928, but did not result in a firm merger of the companies involved.

Brennabor was one of the first German car manufacturers to introduce assembly line production in 1923/24. The global economic crisis ensured that the production numbers declined, especially since no small car was on offer. The vehicles equipped with front wheel drive vehicles (after Voran patents) in 1931 for the first time, however, only resulted in a prototype based on the type Juwel 6 . For mass production it did not come for financial reasons anymore. In 1932, automobile production was initially interrupted for eight months, briefly resumed in late autumn with new models and finally discontinued in 1933. In 1932, the Brennabor factories were converted into an AG.

In Berlin , the company operated six sales offices and one in Potsdam .

From 1930 to 1942 Brennabor produced light motorcycles with built-in motors from Fichtel & Sachs , from 1939 also with own engines (model G 100) and bicycles until 1945. Armaments were also produced; for example, the 2-cm flak 38 . The company's history ended after the Second World War in 1945 with the dismantling of the work.

In the 1950s, the brand appeared Brennabor in West German production mopeds again  , produced by the Brennabor Fahrzeugwerke GmbH , whose factory in the Bank Street 20-26 in Hamburg was. Among other things, there was a model Brennabor FP 5from 1953 to 1955 . In the 1990s and 2000s Brennabor was used as a trademark for bicycles of various manufacturers.

Brennabor products have been exported worldwide to Australia, China, South America, South Africa and all over Europe.

Subsequently, the Brandenburg Tractor Works , which produced wheel and chain tractors until 1964 and then converted the production to commercial vehicle transmissions, established themselves on the factory premises . Since 1991, Getriebewerk Brandenburg has been a subsidiary of ZF Friedrichshafen .