Automotive manufacturer Nuremburg ; Germany From 1906 to 1914.

Foundry Justus Christian Braun was founded in Nuremberg in 1845 and specialized in fire-fighting equipment from around 1860 onwards. From it went the Nuremberg fire extinguishers and Maschinenfabrik vorm. Justus Christian Braun AG (1890-1911) and Justus Christian Braun-Premier-Werke AG (1911-1919), who also worked in vehicle construction. This makes Braun one of the origins of the FAUN plants , which in turn gave rise to today's companies Tadano FAUN GmbH in Lauf at the Pegnitz and FAUN Umwelttechnik GmbH & Co. KG in Osterholz-Scharmbeck.

From 1906 motor-powered fire fighting vehicles and other commercial vehicles were built. 1909, the insolvent bricklayer union was taken over, since then were also passenger cars on offer. In 1911, the company was in financial distress and could only by the entry of the established with a branch in Nuremberg-Doos British bicycle and motorcycle manufacturer The Premier Cycle Company Ltd. the Justus Christian Braun-Premier-Werke AG was founded .

Nevertheless, the company had to declare bankruptcy in 1913 and was run by a bankruptcy trustee until the end of the First World War . End of 1913, a substantial portion of the company was at the Nuremberg  vehicle factory Karl Schmidt  sold the 1917 with the vehicle factory Ansbach AG to F ahrzeugfabriken A nsbach u nd N ürnberg AG , since 1920 short FAUN-Werke AG , merged .

In addition to fire-extinguishing equipment, fire-fighting vehicles and other commercial vehicles, passenger cars were manufactured from 1909. First, by the were Masons Union adopted Reibradwagen built for about a year on. 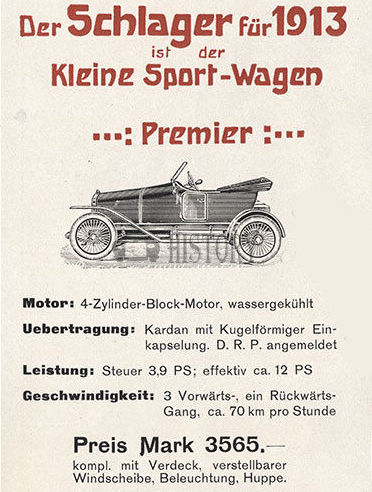