Automotive manufacturer of Leipzig Germany from 1925 to 1939. 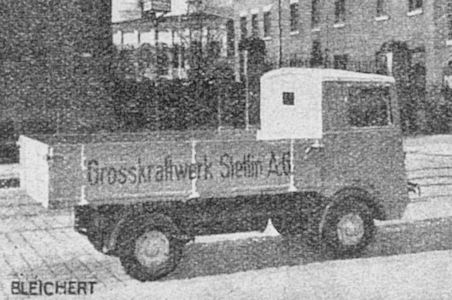 The Adolf Bleichert & Co. was a company active in the field of cable car construction and trucks and located in Leipzig - Gohlis .

After a 1874 founded by Adolf Bleichert cable car factory was terminated by the change of his associate Theodor Otto to Julius Pohlig in Siegen , Adolf Bleichert founded in1876 ​​together with his brother-in-law, the merchant Peter Heinrich Piel, the Adolf Bleichert & Co. Leipzig-Neuschönefeld, which soon a reputation as a manufacturer and builder of cable cars acquired.  1881, the operation to Leipzig-Gohlis was moved,  the (then with 20 first technical and commercial staff "official") and 70 workers delivered cable cars all over the world.

Due to the First World War , international business relations were largely lost. The company manufactured in these years a large number of Feldseilbahnen, which were manufactured in Leipzig according to a modular system.  Max and Paul Bleichert were recognizing the merits of their company of King Friedrich August III. raised by Saxony to the peerage. After the First World War, the business shifted to the construction and construction of aerial cableways for passenger transport, especially since 1924 a license agreement with the South Tyrolean engineer and entrepreneur Luis Zueggcompleted and in the further cooperation, the system "Bleichert-Zuegg" was developed for cable cars, that attracted worldwide attention.

In 1920 another factory was opened in Leipzig- Eutritzsch . In order to limit the risk from the new business, the Adolf Bleichert & Co. Personen-Drahtseilbahnbau GmbH  was founded in 1924 and the Bleichert Kabelbagger GmbH in 1928 , which manufactured rope excavators for surface mining. The Adolf Bleichert & Co. was converted in 1926 by an open trading companyinto an AG . In 1928, the company had 1,200 employees and 2,000 workers and had subsidiaries in Neuss and Brno .

In addition to the cable car construction had been converted since 1925 electric carts in trucks with 1.5 t, from 1936 to 7 t payload and sold as Bleichert electric cars . 1935 developed also a two-seat convertible with electric drive (30 km / h, approx. 70 km range), which was built until 1939.

More information on
Adolf Bleichert & Co.
Automotive manufacturer of Leipzig Germany from 1925 to 1939.