Automotive manufacturer Traunreut; Germany From 1955 to 1958. 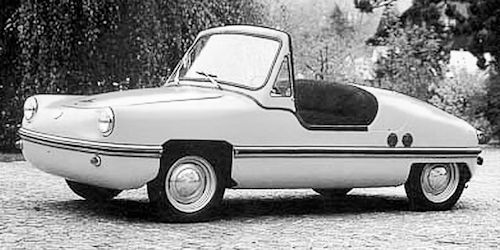 The Bayerische Auto Works were a German automobile manufacturer of the 1950s based in Traunreut .

In 1955, Harald Friedrich, owner of the ALZMETALL machine tool factory and foundry , acquired a license for the construction of an automobile by the designer Egon Brütsch and had the car improved by 77-year-old Hans Ledwinka , formerly Tatra .

In 1956, Friedrich founded the Bayerische Autowerke GmbH together with the Victoria Zweirad Werke in order to counteract the crisis in the two-wheeler industry. The company launched the microcar " Spatz 200 " on the market. Sales were handled by the Victoria dealer network.

First, the sparrow had a 191 cc four-speed engine from Fichtel & Sachsthen a blower-cooled 250 cc VICTORIA two-stroke engine with a Peggy and Swing-like five-speed electromagnetic drive. This stronger version was called " Victoria 250 " and was finished in Nuremberg .

The fiberglass bodywork resembled a sports car, was too underpowered to qualify as such, no matter how light it was. The cloth top was erected from inside the car. Reverse was, like for the Messerschmitt KR200, by running the engine backward. The car was mechanically similar to the KR200 but with a single bench seat for two of three people sitting beside each other.