Automotive manufacturer Germany From 1917 to 1984.

Zündapp (a.k.a. Zuendapp) was a major German motorcycle manufacturer founded in 1917 in Nuremberg by Fritz Neumeyer, together with the Friedrich Krupp AG and the machine tool manufacturer Thiel under the name "Zünder- und Apparatebau G.m.b.H." as a producer of detonators(Zünder- und Apparatebau is German for Igniter and Apparatus). In 1919, as the demand for weapons parts declined after World War I, Neumeyer became the sole proprietor of the company, and two years later he diversified into the construction of motorcycles.

Several attempts have been made to enter automobile production. As early as 1924, a small car of the English manufacturer Rover was to be built in Munich -Freimann under license . In May 1931, the press was again announced a project . It should be built a 4-seater passenger car. For the first time the name " Volkswagen " appeared here . After only three built sample cars, however , the project of the Porsche Type 12 was canceled (see also: VW Beetle # prototypes of Zündapp and NSU). In 1933, Zündapp built a four-wheeled van with a 400 cc two-cylinder boxer engine and rear-wheel drive, later replacing the engine with a 500 cc motorcycle engine. Designers of this vehicle were Richard and Xaver Kitchens .

In 1943 and 1944 Zündapp was involved in the production of the explosive tank "Goliath V" of the German Wehrmacht; This version had two-cylinder two-stroke engines (Zündapp SZ 7) of 703 cc displacement with 9.2 kW (12.5 hp) at 4500 / min for. These remote-controlled explosive tanks reached about 10 km / h and some kilometers range.

After presentation of some prototype cars in the early 1950s 1957/1958, the four -seater compact car Janus was mass produced. Since Zündapp significant extensions of the machinery u. a. had to press for the body , the 6902 built vehicles were not an economic success. Therefore Zündapp boss Neumeyer sold 1958 the old Nuremberg main factory, and the entire Zweiradfertigung was now - limited to two-stroke engine up to 250 cm² displacement - in the more modern plant in Munich (Anzinger road 1-3) operated. In 1958 Zündapp introduced a two-door coupe with a Climax engine and a body of Pininfarina .

The first Zündapp motorcycle was the model Z22 in 1921. This was the Motorrad für Jedermann ("motorcycle for everyone"), a simple, reliable design that was produced in large series. Zündapp's history of heavy motorcycles began in 1933 with the K-series.The Zündapp K800 had a flat-four engine with shaft drive (a layout adopted by Honda for the Gold Wing in 1974) and were the only 4-cylinder machines used by the German armed forces in World War II.

From 1931 Ferdinand Porsche and Zündapp developed the prototype Auto für Jedermann ("car for everyone"), which was the first time the name Volkswagen was used. Porsche preferred the 4-cylinder flat engine, but Zündapp used a water-cooled 5-cylinder radial engine. In 1932 three prototypes were running. All three cars were lost during the war, the last in a 1945 Stuttgart bombing raid.From 1936 to 1938 Zündapp produced the KKS500 model. This was the first Zündapp with a foot gear change, and 170 examples were built.From 1940 onward Zündapp produced more than 18,000 units of the Zündapp KS 750. This is a sidecar outfit with a driven side wheel and a locking differential, supplied to the German Wehrmacht.

Zündapp also made aircraft engines including the 9-092, which was used in light aircraft, including the Brunswick LF-1 Zaunkönig (1942) ab initio trainer aircraft.

After the bankruptcy, the entire production line and intellectual properties was bought by Xunda Motor Co., Tianjin, China. They produced small Zündapp motorcycles from 1987 till the early 1990s. Zündapp is still in business, but makes Honda based 4-stroke motorcycles and electric mopeds.

Some prototype cars in the early 1950s 1957/1958, the four -seater compact car Janus was mass produced. Since Zündapp significant extensions of the machinery u. a. had to press for the body , the 6902 built vehicles were not an economic success. Therefore Zündapp boss Neumeyer sold 1958 the old Nuremberg main factory, and the entire Zweiradfertigung was now - limited to two-stroke engine up to 250 cm² displacement - in the more modern plant in Munich (Anzinger road 1-3) operated. In 1958 Zündapp introduced a two-door coupe with a Climax engine and a body of Pininfarina . 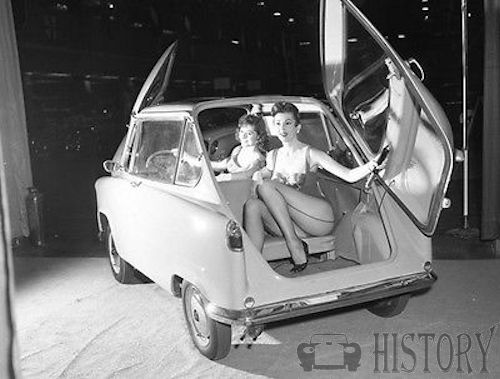 The Zündapp Janus was a four-seat scooter mobile (then called a compact car - today better called microcar ) of Zündapp-Werke GmbH, Nuremberg , from the 1950s.

The construction of the Janus goes back to the prototype Dornier Delta of Claudius Dornier , the eldest son of Claude Dornier back to the Zündapp had acquired the production license. The delivery began in June 1957, but the production was stopped in 1958 after production of only 6902 copies. Janus - like many microcar types of the time - disappeared from the market after a short period of production, because his price (price of Janus: 3290 DM + 40 DM for the heating, today corresponds to 7.901 Euro) is too close to the 3780 DM , which cost about a standard beetle.

The unusual thing about this scooter mobile and the reason for using the name of the double-headed Roman god Janus are the seating position and the arrangement of the same doors at the bow and stern. The rear passengers sat with their backs to the direction of travel ( dos-à-dos ), looked back and had a leg and headroom as in a middle-class car. The transport of bulky goods was relatively easy.

The interesting details of the Janus include next to the arrangement of doors and seats an otherwise only in some sports cars existing mid-engine , the hydraulic four-wheel brake (then not yet taken for granted) and independent suspension of all wheels, which brought a very good handling with little lateral inclination despite rear swing axle . Shovel-shaped ribs increased the stability of the brake drums and attracted cooling air. The shift lever was attached to the left of the driver, the gears were in one plane (motorcycle circuit).

The mid-engine allowed a balanced weight distribution. The advertisement also said: "Unfamiliar so far, but certainly pleasing in terms of rain and moisture: minor maintenance such as candle changing or nozzle cleaning can be done under its own roof." However, the high noise development in the interior of the vehicle was a disadvantage of the mid-engine solution and the occasional odor, due to poor sealing of the cover. 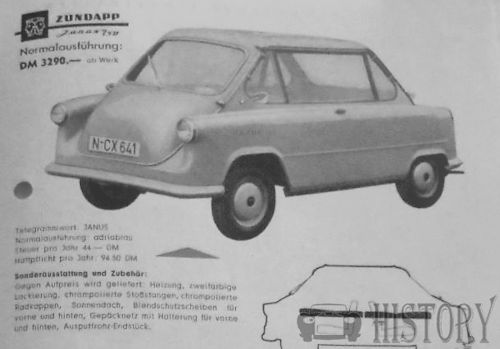