Automotive manufacturers Berlin Germany From 1905 to 1907 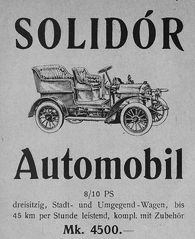 The Solidor was a German automobile manufactured by Beaullieu & Krone in Berlin from 1905 until 1907.

It was basically a rebranded Passy-Thellier. cost mk 4500 and a speed of 45 km.The company moved from Passy-Thellier both complete chassis and parts for the production of its own chassis. There were single-cylinder , two-cylinder and four-cylinder models from 8 hp to 30 hp . The bodies were made by themselves.