Automotive manufacturers Germany From 1954 to 1955 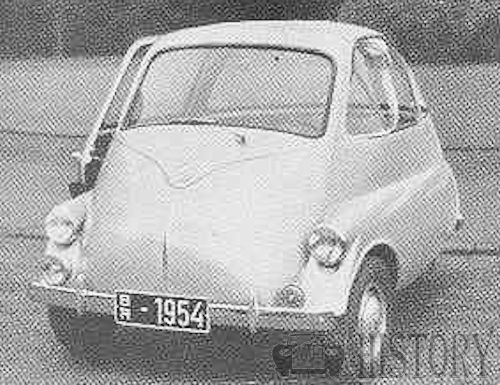 Hoffmann was a  manufacturer in Ratingen-Lintorf, Germany. Between 1948 and 1954 the company also manufactured motorcycles. It made a range of models using engines from 125cc to 250cc made by ILO, and the Gouverneur, which had a transversely-mounted 248 cc flat twin four-stroke engine designed by Richard Küchen, and shaft drive. The Gouverneur was developed into the MP 250-2 and finally, in 1953, the S 300 model.

From 1949 to 1954 Hoffmann also made at least 60,000 Vespa motor scooters under licence. A licensing dispute brought this to an end in 1954. At the same time Hoffmann also withdrew from making its own motorcycles, and had further legal problems with their microcar, the Auto-Kabine.

Hoffmann built the Auto-Kabine 250 microcar in the last quarter of 1954. This was a copy of the Isetta, using the Gouverneur's 250 cc flat-twin engine, and featuring a single suicide door on the right side of the car instead of the Isetta's door on the front.

BMW, the official licence-holder for Isetta production in Germany, sued Hoffmann, forcing them to end production after selling slightly more than 100 Auto-Kabine 250s for DM 2,900 each.

Hoffmann had invested heavily in developing the Gouverneur motorcycle, the Auto-Kabine microcar, and a more powerful version of the Vespa. None of these investments turned out to be profitable. The Governeur initially had quality control problems due to an inexperienced workforce and was later affected by a decrease in the motorcycle market as the German public increasingly turned to cars. Hoffmann was forced to end production of its Auto-Kabine microcar when BMW, holder of the licence to build Isetta microcars, won its infringement lawsuit against Hoffmann. Most significantly, the marketing of Hoffmann's more powerful version of the Vespa caused Piaggio to withdraw their licence. With Hoffmann's Vespa licence gone, the creditors lost faith in the company and called in their loans, forcing them into bankruptcy.