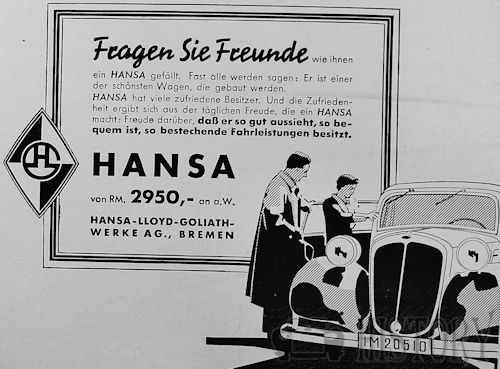 Hansa-Automobil Gesellschaft m.b.H was a German car brand established in 1905, which in 1914 was merged with Norddeutsche Automobil und Motoren AG(NAMAG) into Hansa-Lloyd-Werke A.G.. From 1929 to 1931 it was taken over by the Borgward group. Hansa was based in the Bremen suburb of Hastedt.

The Hansa automotive company had been established as a car and truck makers since 1905. During the Great Depression in 1929, Hansa-Lloyd was bought by Carl F. W. Borgwardas the factory was conveniently located opposite to his own Goliath factory on Föhrenstrasse in Bremen-Hastedt. The range of trucks of Hansa-Lloyd was complementing the Goliath range, and the purchase allowed Carl Borgward to fulfill his dream to produce his own cars. 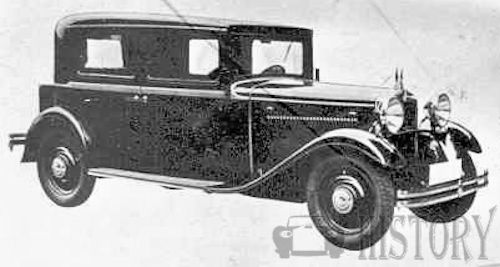 Carl Borgward stopped Hansa-Lloyd's production of luxury cars, but continued its line of trucks until 1939. From 1933 onwards the brand name Hansa became the name of several Borgward passenger car models. The Hansa Konsul and Hansa Matador were introduced and shortly thereafter the small rear-engined Hansa 400 and 500.

In April 1933 the tax rules which were favoring small cars such as the Hansa 400 were abolished. Borgward decided to produce the new Hansa 1100 four-cylinder two-door all-steel Sedan, and then the six-cylinder 1700 and 2000. From 1939, the 2000 carried the Borgward brand. The name Hansa started to be phased out, becoming Hansa Borgward, then Borgward Hansa and finally Borgward. 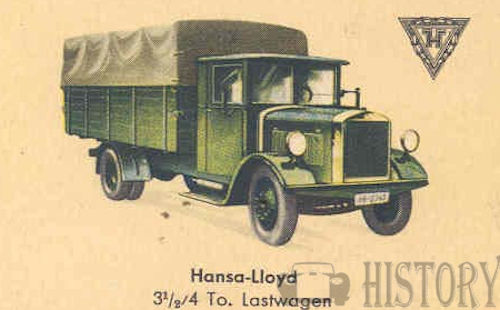 In the Second World War, the Bremen factory was completely destroyed.

The Borgward Hansa 1500, sold from 1949 onwards, was the first new car construction in Germany, followed by the Borgward Hansa 2400 large fastback sedan in 1952. From 1958, during the last three years of production, the former Goliath 1100 automobile were sold under the Hansa 1100 brand name until the Borgward group collapsed in 1961. 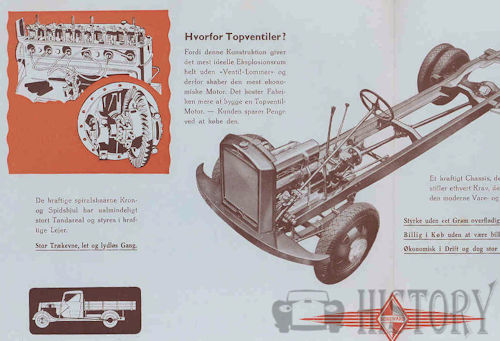