Gutbrod was a German manufacturer of cars, motorcycles and small agricultural machinery. The firm was founded in Ludwigsburg by Wilhelm Gutbrod in 1926. It originally built "Standard" branded motorcycles. In 1933 the company relocated to the nearby Stuttgart suburb of Feuerbach, and from 1933 to 1935, Standard Superior cars were built with rear-mounted engines.

In November 1949, a pre-production series of the convertible saloon Superior 600 was built in Plochingen, and in July 1950 serial production began at the Calw plant . The standard model was offered until April 1954, while at the Frankfurt Spring Fair 1950 also presented Cabriolet was not interested. Little successful was also a "Superior Sport", a nearly 8000 DM expensive roadster with Wendler body, of which 1951/52 twelve pieces were built. From a four-seater sedan announced for 1954, only two prototypes were created . In April 1954, the production of Gutbrod cars had to be discontinued due to financial difficulties. The Calw plant was sold to Bauknecht together with the plant in Plochingen .

Under the leadership of Hans Scherenberg Gutbrod developed together with Bosch at the same time as Goliath a mechanical gasoline direct injection . Both manufacturers showed their models with injection in 1951 at the IAA in Frankfurt and are considered the world's first supplier of mass-produced vehicles with direct fuel injection.  The production of the Superior 700 E began in September 1951. The pontoon body of the small saloon - convertible sedan was built on a forward bifurcated central tube frame. It had two seats and two doors initially hinged behind. From 1951, the doors were hinged at the front and carpeted, in the first version only accessible from the inside of the trunk got a flap. 1952, a three-door station wagon was presented. While the bodywork Weinsberg produced the bodies for the convertible coaches, came the combination of Westfalia plants . The wheels were suspended individually, at the front on double wishbones with coil springs and telescopic shock absorbers, at the rear on a pendulum axle, also with coil springs and telescopic shock absorbers. Experiments with front transverse leaf springs had not led to a satisfactory result. The drum brakes on all four wheels were hydraulically operated. 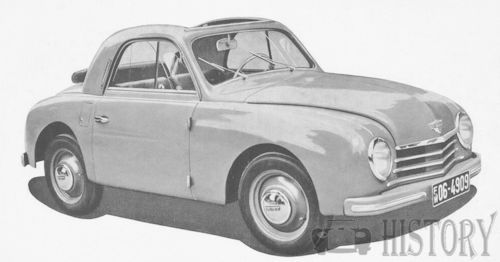 An updated version of the Gutbrod Superior introduced in 1953 benefited from developments towards fuel injection undertaken by Mercedes-Benz dating initially from 1935: this Gutbrod was the first car in the world to be offered with fuel injection, some three years before fuel injection appeared in a production engine offered by Mercedes themselves.

The small Gutbrod Superior model was produced from 1950 to 1954 using the company's own, front-mounted twin-cylinder two-stroke engines initially of 593cc. In April 1953 the engine size was increased to 663 cc for more expensive 'Luxus 700' versions of the car, while the standard model continued to be offered with the original smaller engine. Claimed power output was 20 hp (15 kW) for the base version, while for the larger engine 26 hp (19 kW) or 30 hp (22 kW) was claimed according to whether fuel feed came via a carburettor or a form of fuel injection. Press reports commended the speed and secure handling of the cars but indicated that the sporty handling came in return for sacrificing some comfort. It was also noted that normal conversation became impossible at speeds above about 80 km/h (50 mph) due to the noise.

The Gutbrod Superior was a small car that the van manufacturer Gutbrod built from 1950 to 1954. A total of 6860 convertible coaches and 866 station wagons were built in just under four years.

The model 600 had a front longitudinally installed water-cooled two-cylinder - two-stroke engine with 593 cc displacement (bore x stroke = 71 mm × 75 mm) and a power of 20-22 HP (15-16 kW) at 3250 / min. Besides there was the model 600 luxury with better equipment. 1952 followed the 700 luxury with 663 cc engine (bore × stroke = 75 mm × 75 mm) and a power of 26 hp (19 kW) at 4300 / min. As an alternative to this carburetor engine, there was an engine with the unusual gasoline direct injection, This engine provided 30 hp (22 kW) at the same speed. All models had a single-disc dry clutch, a non-synchronized three-speed gearbox and front-wheel drive. In 1953, the 700 cc engines were fitted with second and third gear synchronized transmissions. The 600 consumed an average of 7.5 liters two-stroke mixture per 100 km and reached a top speed of 100 km / h. At the 700 luxury consumption levels were at 7.5 liters two-stroke mixture for the carburetor version and 7.0 liters of gasoline for the injection version, which had separate lubrication . The Cabriolimousines of the 700 luxury ran a maximum of 110 km / h fast as a carburetor version and a maximum of 115 km / h fast injection system. The station wagons reached 100 km / h or 105 km / h.

7726 cars were produced before the factory was forced to close. The car was developed at the company's small factory at Plochingen am Neckarby Technical Director Dr. Hans Scherenberg during the time of Walter Gutbrod who had taken over the firm in 1948 on the death of his father, Wilhelm Gutbrod (26 February 1890 - 9 August 1948). Scherenberg arrived at Gutbrod from Mercedes where the victorious war-time allies had enforced a pause in engine fuel-injection development,and in 1952 he would return to that firm. 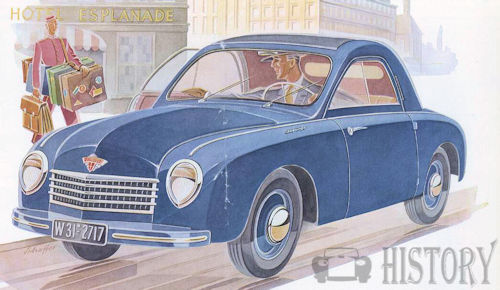 A Gutbrod injection engine can still be seen in the Deutsches Museum in Munich.

In 1956, the Norwegian Troll car was built on a Gutbrod chassis. pioneering the use of fibreglass in automobile coachwork along with the Chevrolet Corvette as well as some other small scale car manufacturers. 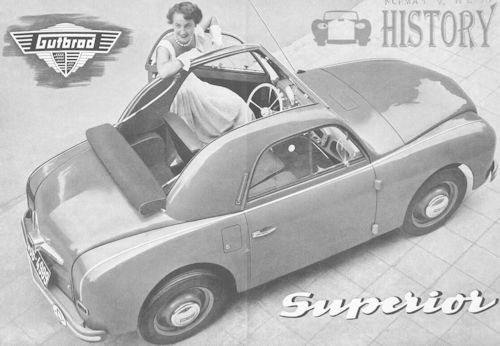