Automotive manufacturer Germany From 1955 to 1969. 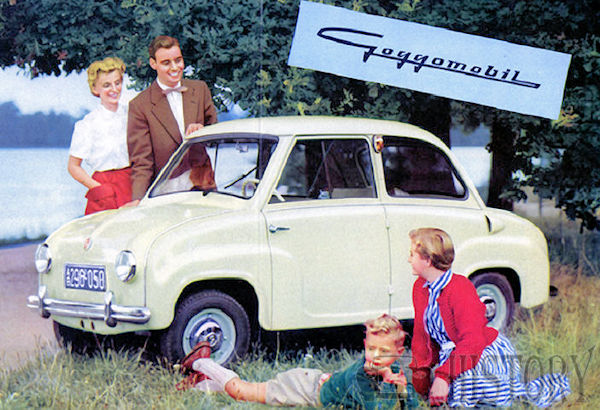 Goggomobil was a series of microcars produced by Hans Glas GmbH in the Bavarian town Dingolfing between 1955 and 1969.

When the motorcycle manufacturers came into crisis in the 1950s , because the potential customers increasingly demanded "a roof over their heads", the agricultural machinery manufacturer Glas developed the Goggomobil. The small car was presented in 1954 at the International Bicycle and Motorcycle Exhibition (IFMA) in Cologne ; The first production vehicles ran in early 1955 from tape. It was a small four-seater sedan with a body that was based on conventional automobiles. According to advertising The Goggomobil provided space for four adults, but with an interior length of about 1.60 m between the pedals and the rear seat back, it was scarce. Originally designed by Hans and Andreas Glas in collaboration with the former aircraft designer Karl Dompert body with front door was planned. In the advertising brochure of 1954 it said: "For reasons of expediency, the entry has been moved forward. (Side entry conditions for small vehicles uncomfortable bending over). "  The plan was abandoned a few weeks before the start of production in favor of two side doors. The suggestion for it should have come from the race friend Schorsch Meier, who was friendly with the Glas family .

The original model of the Goggomobil was still a minimal car without any comfort . So there was only in 1957 a second windshield wiper and crank instead of sliding windows. As of this year, there were also engines with 300 and 400 cc in addition to the 250 cc engine. From 1964, the two doors were front and no longer struck the B-pillar . Initially, the car was only in the color "Saharabeige". From 1957 to 1969, a coupe variant was also offered under the name TS , a two-seater with two additional emergency seats and panoramic rear window .

Goggomobils were exported to the United States. These were special export versions, with the 400 cc engine, an automatic gasoline-oil mixer, and 7-inch (180 mm) sealed-beam headlights as required by US regulations.

Between 1957 and 1961 some 700 sports cars called Goggomobil Darts were produced by Buckle Motors Pty Ltd in Sydney, Australia.Other Goggomobil models were also produced under licence, including saloon, coupe, coupe-convertible and light van variants.These were fitted with Australian produced fibreglass bodies based on a Sunbeam Alpine in place of the steel bodies of their German counterparts. Australian production totalled approximately 5,000 units. 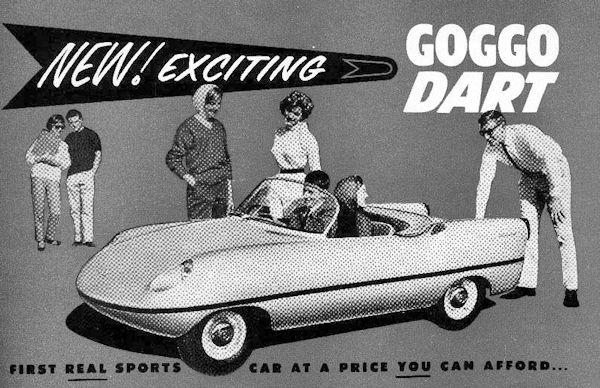