Eisenach (AWE) was an automobile manufacturer in Eisenach, Germany.

Heinrich Ehrhardt founded the Fahrzeugfabrik Eisenach (FFE) in Eisenach on 3 December 1896 as a stock company. Initially he produced bicycles and guns, but after two years he started to produce a motor car which he called the Wartburg, a licensed model of the French Decauville. The company was the third to manufacture cars in Germany, after Daimler Motoren Gesellschaft and Benz & Cie. His son Gustav took over the factory that at the end of the 19th century employed 1,300 workers, being one of the largest in Thuringia. 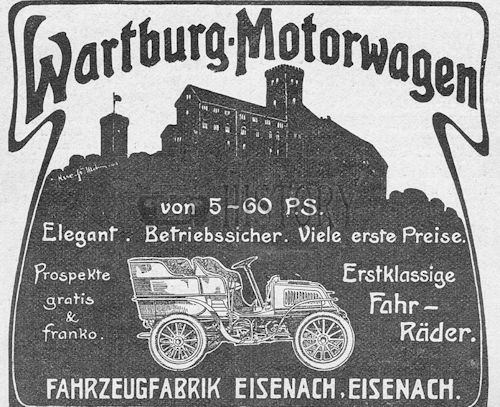 In 1903, the Ehrhardt family withdrew from management due to financial losses and also because the license to build Decauvilles was revoked. The factory began building under the new name, Dixi (Latin, "I have spoken") in 1904 with Willi Seck as chief engineer. The top model, the type U35, was introduced in 1907 and was soon recognized for its reliability and performance with 65 hp (48 kW) and a top speed of 85 km/h (53 mph).

During World War I the company produced trucks and guns. Afterwards the factory suffered from reparations with removal of equipment. In 1919, car production resumed; but soon economic hardship forced a merger with Gothaer Waggonfabrik AG. Another result of the economic downturn was a change in output, focusing on small cars. In 1927 Dixi produced the DA-1 3/15, a version of the British Austin 7 built under licence. 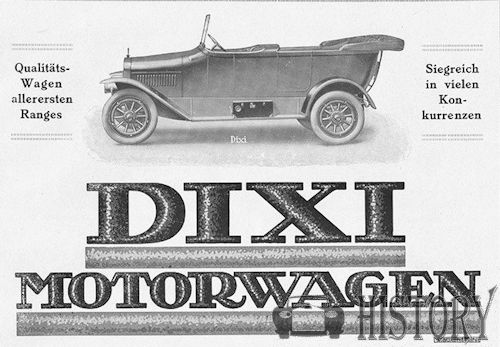 In November 1928 BMW acquired the Fahrzeugfabrik Eisenach A.G. (Marke "Dixi") from the Gothaer Waggonfabrikbringing the independent existence of Dixi to an end and the Eisenach factory became the birthplace of car manufacturing by BMW. The Dixi continued briefly as the BMW Dixi but the renamed BMW-Factory Eisenach soon started making an updated version of the car called the BMW 3/15PS dropping the Dixi name. By 1931, 25000 cars had been produced in a series going from DA 1 to DA 4. The DA-3, a sporting version, saw a re-appearance of the Wartburg name. In 1932 a new small car, the 3/20 AM-1, was announced with independent suspension all round and an enlarged 788cc (48ci) engine.

In 1930 BMW also started to produce motorcycles at Eisenach. The 1937 introduced BMW R 35 was the most notable product.

In 1942 regular automobile production was stopped because of World War II. The BMW factory in Eisenach started to manufacture motorcycles for the Wehrmacht as well as aircraft engines for the Luftwaffe. By the end of the war about 60% of the factory had been destroyed. 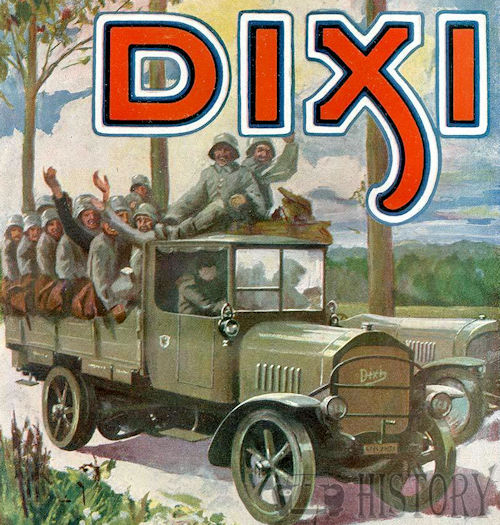 After the war, Thuringia was part of the Soviet sector, and the factory became a Soviet Stock company named Sowjetische AG Maschinenbau Awtowelo, Werk BMW Eisenach (Soviet Awtowelo Co., Eisenach BMW Works). Production restarted with the BMW 321, of which almost 4,000 were made between late 1945 and 1950. A handful of BMW 326s were made in 1946-7 and 161 BMW 325-2s were made in 1952. In 1949 the Eisenach works launched the BMW 340 (a development of the BMW 326 with modified front and rear bodywork) and the BMW 327.

As long as the Soviets owned the company, BMW in Munich could not bring legal proceedings to protect its tradename. As the Munich factory was not producing cars yet, all "BMWs" made from 1945 to 1951 are Eisenach products.

In 1952 the works were transferred to ownership by the East German government and renamed EMW or Eisenacher Motorenwerk (see below). It continued type 327 production and further developed the type 340 as the EMW 340-2. Production of both models ceased in 1955, by which time Eisenach had produced a total of over 21,200 BMW/EMW 340s and 400 BMW/EMW 327s. Total production of four-stroke automobiles between 1945 and 1955 was just over 30,800.

In 1952, the Soviet owners handed the company over to the German Democratic Republic, and it became a state-owned company. By that time BMW from Munich was able to secure its tradename, logo, and typical double-nostril grille appearance, and started to produce cars again. The Eisenach company was renamed Eisenacher Motorenwerk(EMW), its logo being a variation of the BMW logo, the blue quadrants replaced by red ones. EMW participated in the 1953 German Grand Prix. One year later it received its final name VEB Automobilwerk Eisenach (AWE).

The first new model had a three-cylinder two-stroke engine, the IFA 309. This was based on the DKW F9 prototype that was developed in 1939, but not put into production. The manufacture of models derived from pre-war BMWs, finished at the end of 1955 (see above).

In 1956, the first Wartburg (Type 311 and later the 312) was launched with a new design, but maintaining the DKW based two-stroke engine. The Wartburg 353, introduced in 1966, received a new body, but still used the two-stroke engine, now with a displacement of 1000 cc. Many new ideas were proposed by the engineers, but they were not accepted by the state authorities. Finally, in 1988, four-cylinder four-stroke engines produced by Volkswagen were introduced.

The German reunification of October 1990 meant the end for AWE, as it could not compete with modern methods of production and the Treuhand agency closed it in April 1991. A good number of the employees found work in the newly created Opel factory, opened in Eisenach in 1992.

While most of the factory has been demolished, one part (Building O2) has been preserved to house the Automobilbaumuseum Eisenach (Eisenach Car Museum).

Automobilwerk Eisenach
Automotive manufacturers Germany From 1898 to 1928
Updated
Friday, 25 May 2018
Edited By
MCH