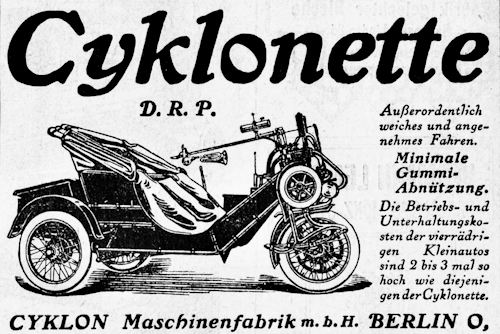 The three-wheeled Cyklon Cyklonette was made for 1902. It was a three-wheeler with a single wheel in the front to steer, and to provide propulsion from a 450 cc one-cylinder engine mounted directly above it. This made the Cyklonette one of the earliest front-wheel drive cars. Power was 3.5 bhp (2.6 kW) in the first models. Later models were equipped with a 1.3 L two-cylinder engine producing 6 bhp (4.5 kW), though some had a straight-four. The Cyklonette was available until 1923, well after three-wheelers had vanished from the mainstream.

The Cyklon Schebera was available for 1920 and sported a 1.2 L straight-four and was front-engined with rear-wheel drive. The updated Cyklon 9/40 was released in 1926, with a six-cylinder engine displacing 2.3 L. All Cyklon models were hit hard by the Great Depression.

From 1927 The 9/40 hp had the same body of Ambi-Budd as the Adler Standard 6 and was the cheapest six-cylinder car in Germany.
The distribution of the vehicle was taken over by the Dixi plants. After the takeover of these works by BMW, the production of the car in 1929 had to be discontinued due to a lack of sales opportunities.
In the same year, a new six-cylinder with 1.8 liters displacement appeared, but of which only a few copies were created in two years.

Sales were sluggish in the final years, and the company went out of business in 1931.