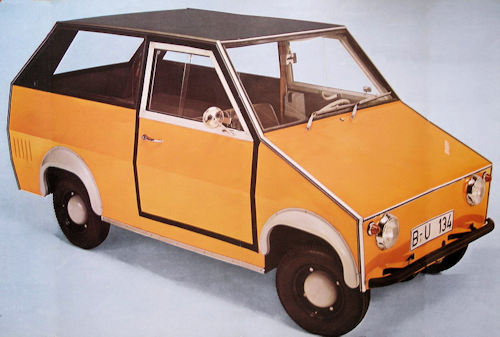 A.W.S  Automobilwerk Walter Schätzle was a German Automobile manufactured in Berlin (Germany) from 1973 to 1974. The first car was shown in 1970 and a few hand-built cars were made, but series production begain in 1973. 1700 were made.

The AWS Shopper was designed by Walter Schätzle in 1970, an erstwhile Borgward dealer. The factory was located in Berlin(West) in Rudow. The company first started to manufacture the car in 1973, marketing was strong but the demand for this car was low during the 1970s. The company ceased manufacture in 1974.

The AWS Shopper's internal design was unique, the frame was made with square steel tubes connected by special angular brackets, and the shell of the car was made from plasticized sheet metal panels. This meant that fixing the car was simple. Goggomobil parts were also used.